Foundation engineering is the basis of every stable building

What happens on a construction site before a building starts to make its way up from the ground? Foundation engineering is the often-overlooked cornerstone of all construction – without it, our buildings would tumble to the ground.

Without a sturdy foundation, no building would stand upright. That is why YIT’s engineers embark on “a journey to the earth’s mantle” prior to every new construction project, says Hannu Ratamäki, Head of YIT’s Foundation and Special Engineering unit.

The work taken on by Ratamäki’s unit is hardly ever noticeable to common person’s eye. When a building starts to take its visible form and rise up from the ground, foundation engineers have already worked their magic. This invisible work is, however, extremely important.

It takes an expert to build a foundation

”Foundation engineering means all the things required for a building to remain stable. It encompasses all things from quarrying and making an excavation pit to the moment a building’s structures start to rise up from the ground,” Ratamäki says.

Modern-day foundation engineering and earthworks require solid expertise. When it comes to foundations, the most important thing is to estimate, how well the soil will support the mass and pressure of the building above it.

“In the olden days, making a foundation was based on visual approximation and praxis. If a property looked like wouldn’t accrue water or sink underneath you boot, it was solid enough for a building. Then it was simply a matter of laying the cornerstones and building with timber above them. If something seemed crooked, you would just fix it later on. But that kind of construction won’t do nowadays.”

Depending on the quality of the soil, modern earthworks utilise techniques ranging from piling to anchoring. Stabilisation is a method in which the soil is reinforced by adding different types of binders to it. Pile driving uses supporting piles to transfer the building’s load into the ground, and it is mainly used in housebuilding and bridge projects.

Increasingly dense cities and ever-changing soil among some challenges

High-rise structures and building near water are examples of projects that might pose challenges for foundation engineers. Increasingly dense cities mean that construction has to delve deeper as more underground spaces like parking garages are being built – and neighbouring buildings’ foundations need to be considered in the process. Additionally, because of the impact of water and other forces of nature, soil undergoes changes in the long run. The earlier YIT’s foundation engineers get to share their knowledge with the customer on a project’s planning phase, the less likely are unpleasant surprises to emerge along the way, Ratamäki says.

On the other hand, it is exactly the surprising nature of foundation engineering that makes it so intriguing. An archaeologist’s attitude and innovative ideas are required in the job, as the conditions of the ground can change drastically even within a few square metres, Ratamäki explains. He warmly recommends foundation engineering as a viable career path for aspiring construction students.

“When working on god-created ground, every excavation is different.”

Foundation engineering is a must in almost every construction project on earth.

“The only structures that don’t have anything to do with foundation are aeroplanes,” Ratamäki laughs.

He lists three recent projects as prime examples of how YIT’s know-how in foundation engineering has been put to good use: the 2016 Rotermann quarter redevelopment in Tallinn; the 365-flat apartment building project taking place this year in Koskela Helsinki; and the new eye hospital Tammisairaala currently in planning phase in Meilahti, Helsinki.

In Tallinn, the former industrial area, the Rotermann quarter in the heart of the city, was given a new life as a modern shopping, entertainment, business and residential zone. The historical buildings had to be preserved while building an underneath parking garage in silty soil conditions. The red-brick landmark chimney that characterises the area now stands steadier than ever. 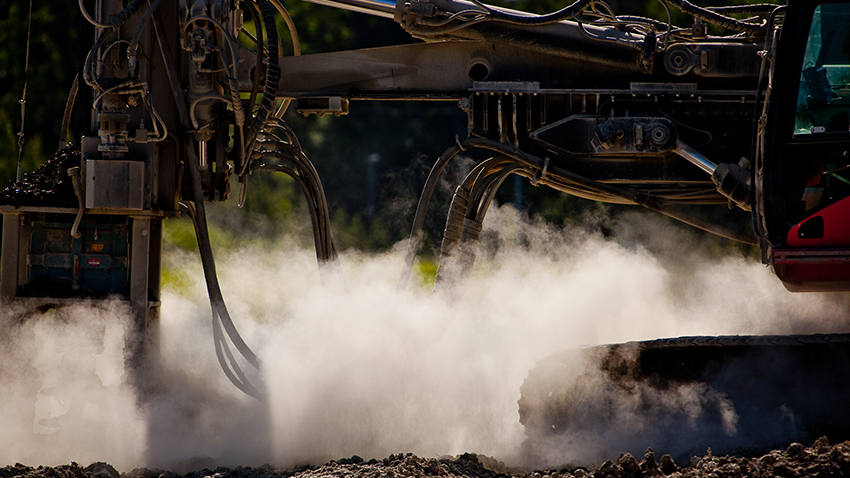 In Koskela and Tammisairaala, the challenges for foundation engineering have to do with location: both sites are central, situated beside busy streets with heavy traffic, which means room for excavations and machines is limited. Both projects also involve building an underground parking garage.

The common denominator between these three projects is their scale. The work is extensive and the budgets big, but the process needs to move ahead with a fast pace. Ratamäki maintains that this, exactly, is where YIT’s unique expertise becomes invaluable. A big company with a long history can provide experts and machinery to all kinds of needs, and their know-how doesn’t get old as the range of projects at hand is vast.

”YIT is where we stay on top of our game – even when working on foundations.”