Our know-how on foundation engineering surpasses Finland’s national borders. The Rotermann quarter redevelopment, completed by us in 2016 in Tallinn, Estonia, combined expertise on earthworks with an interesting cultural heritage site.

If you have been to Tallinn, Estonia, in the last couple of years, it’s unlikely that you’ve missed it:  the Rotermann quarter. It’s where the city’s hip and trendy head for a day of shopping or a relaxing night of wining and dining. And even if you’ve yet to set foot in the area, you’ve probably noticed the red-brick chimney, an impressive landmark in the middle of the newly redeveloped quarter.

The former industrial area in the heart of the city was given a new life as a modern shopping, entertainment, business and residential zone in a redevelopment project in 2014–2016. An old flour warehouse, bread factory, wheat mill, elevator building and cattle house chimney, all dating back to the beginning of the 20th century, were put to new use. To bring more people to the quarter, parking space was needed – and because of the limited land area, it had to be built underground.

”YIT was chosen as the main contractor for these underground works because of the knowledge and own equipment we had”, says Project Manager Martin Vaga from YIT Eesti.

The parking garage works happened at the same time as three new shop, office and apartment structures were built directly above it. All historical building facades had to be supported and preserved while simultaneously demolishing all floors, ceilings, walls and foundations. Weak soil combined with fragile historic structures highlighted the need for YIT’s expertise on foundation engineering.

“Because of silty soil, even small vibration on the worksite caused sinking of the surrounding buildings. We had more than 130 measuring points, which were observed by geodesists daily. If any bigger movements were detected, an immediate action plan had to be made.” 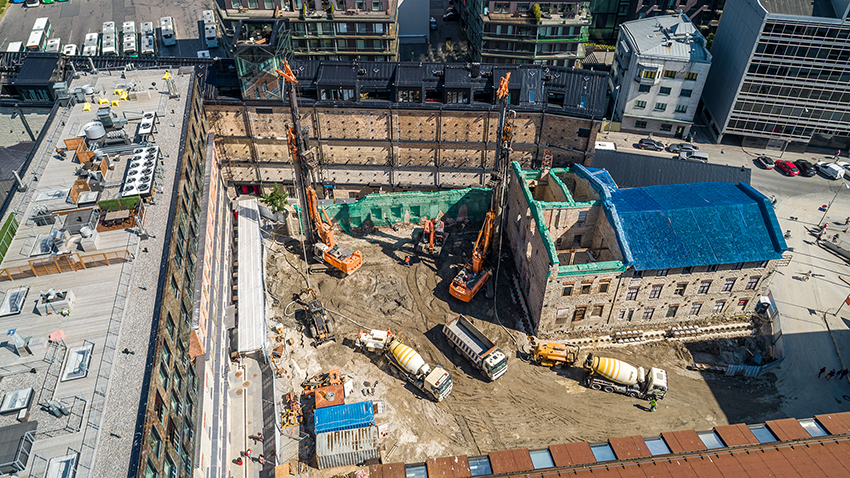 An entirely new foundation was built for the 54-metre-high landmark chimney. The starting point was an “emergency situation”, as the chimney was in a 57 centimetre incline before engineers started demolishing its old foundation, Vaga explains.

“We had great respect for that chimney and that’s why we put all our effort in stabilizing it. At the end everything came out perfectly – the chimney is still standing and continues to be a landmark for the Rotermann quarter.”

Because of the challenging conditions, unexpected surprises came along multiple times during the work period. Of course, all critical things happened on Friday evenings, Vaga laughs.

The good thing is, based on the end result, you would never know.

Foundation engineering is the basis of every stable building