Opened on October 8, 2019, the first phase of the new Veturitie will greatly increase the capacity of car traffic in Pasila. Together with Mall of Tripla and Pasila station, both of which are scheduled to open in mid-October, it also represents a significant improvement in the daily life of cyclists, pedestrians and public transport users in the area.

The grand opening of Mall of Tripla and the new Pasila station will be celebrated in mid-October. The area was taken over by pyrotechnic effects and bright lights of a different sort at the beginning of the month, when the Rescue Department used smoke machines and scrap vehicles to conduct two rescue drills in the Teollisuuskatu tunnel under Tripla. Both of the rehearses went well, and the fire safety authorities gave the green light to have the road opened to the public.

The permission from the authorities was the final confirmation for opening the new connections in Pasila — the Teollisuuskatu tunnel and part of Veturitie — to car traffic on October 8. It was also a big joy for everyone who has put in long days over the past several years to ensure that the new roads, shopping centre and station are completed on schedule.

“It’s not every day that nearly a kilometre of entirely new road is opened for use in the middle of Helsinki. I hope that people will come see both the shopping centre and the new traffic arrangements. We’ve been building this for four years and the end result represents the work of thousands of professionals,” says Construction Manager Aapo Urjanheimo from YIT.

Project Director Harri Verkamo from the City of Helsinki echoes his sentiments. He is certain that the new streets will make daily life easier for a large number of people in Helsinki.

“We are seeing the concrete realisation of several major changes that we have been working on for quite some time. Veturitie will become one of the largest routes for cars entering and passing through Helsinki. The first section of Veturitie has now been reopened to traffic in a different location than where it was previously. The new and improved Veturitie provides convenient access to Tripla and the area to its north. We have also introduced an entirely new route for people to use in the Pasila area: a direct tunnel connection between Teollisuuskatu and Veturitie. In the past, drivers have had to use a narrower route through Ratapihantie and Pasilansilta bridge,” Verkamo explains.

Verkamo points out that the opening of Veturitie and the Teollisuuskatu tunnel does not involve the replacement or closure of any existing roads. Instead, they are entirely new shortcuts that will make it more efficient for people to get around the city.

“Our simulations have shown that the new connection will significantly reduce car traffic on Pasilansilta bridge. Now, we will see how it pans out in real life.”

While the new roads will bring immediate relief to traffic in the Pasila area, they are mainly designed with future needs in mind. As Pasila and the nearby areas will be the subject of major development going forward, the capacity of roads has been calculated to accommodate much larger traffic volumes than at present.

“Plans for the street network are usually made with a time horizon of 15–20 years. The new Veturitie is designed to be a permanent solution with the capacity to serve a substantial increase in traffic volume. It takes into account the population growth in the area as well as the major traffic projects that will affect the nearby areas, such as the upgrades to Tuusulanväylä and Hakamäentie,” says Verkamo, who previously worked as a traffic planner for the City of Helsinki.

“Simulations served as the foundation of traffic planning when we were deciding what kind of traffic network we should create in Pasila. We tested many different options. The alternative we have now implemented proved to be the best. It enabled us to have two intersecting primary routes on different levels. Some of the other alternatives in our simulations resulted in bad congestion on the streets of Pasila.”

The main simulations were conducted using projected data for the year 2035. Forecasts indicate that the Teollisuuskatu tunnel will be used by an average of approximately 15,000 vehicles per day. The traffic volumes increase further towards Hakamäentie: Tripla will have some 35,000 vehicles passing by every day, and Hartwall Areena in excess of 45,000. Currently, in autumn 2019, the traffic volumes are much lower.

“We have worked hard to ensure that this solution will function as well as possible. The tightest spots are the traffic lights closest to the roundabout and tunnel in different directions,” Verkamo says.

According to Urjanheimo, there may also be some initial congestion as people start using the new roads for the first time.

“It’s only natural that people are a bit more cautious when they are driving on roads they haven’t been on before. The lack of familiarity means you have to think and look more carefully to determine which way you should be driving.

Urjanheimo has one tip for people driving to the shopping centre: if you want to enter the parking facility at Tripla, you should choose the lane for the street-level roundabout rather than the tunnel that goes under Tripla.

A tunnel under Tripla

The roundabout mentioned by Urjanheimo is a special feature of the Veturitie project. The lower level of the split-level solution sees through traffic from Veturitie enter a tunnel that passes under Tripla, while on the upper level, Tornikuja and Teollisuuskatu connect with Veturitie as well as Tripla’s parking and service areas. The area can also be reached from the north.

The foundation construction for the roundabout and tunnel has included various work phases: sheet pile driving, jet grouting, bedrock injection, impact pile driving and bored pile driving. The tunnel’s concrete trough goes 15 metres deep. To reinforce the foundation, the entire trough has been piled using approximately 500 bored piles and anchored to the bedrock. The bedrock has also been injected with cement to ensure that the anchors and bolts hold.

“The Teollisuuskatu tunnel actually consists of two separate tunnel passageways. There are separate passageways for the roads going east and west. The tunnel’s technical systems have been connected to a traffic management system that is operated from the Traffic Management Centre. While completely eliminating the sound of cars in the tunnel is not possible, we have worked together with the City of Helsinki to make the passage under Tripla as pleasant as possible. We have put thought into the user experience and focused on lighting and acoustics,” Urjanheimo says. 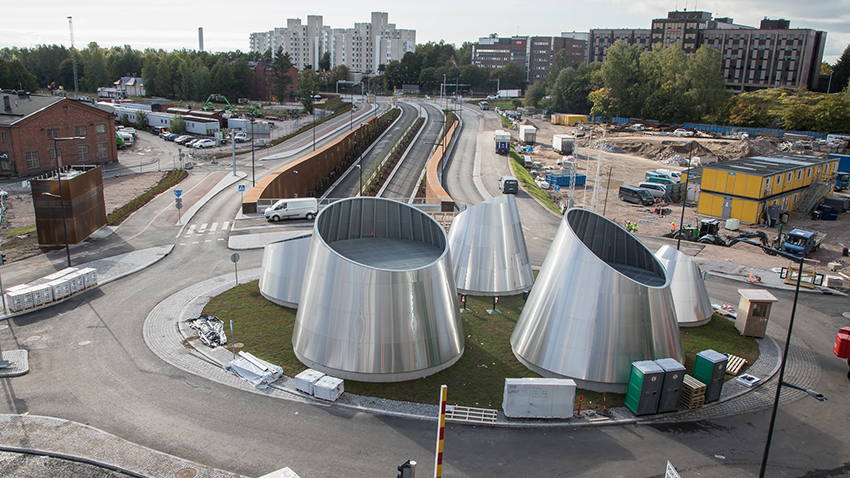 The benefits of the new streets and tunnels in the Pasila area go beyond just people who drive. According to Verkamo, the opening of the shopping centre and station marks an improvement in the daily life of public transport users, cyclists and pedestrians as well.

“When drivers learn to use the new Veturitie and the Teollisuuskatu tunnel, car traffic on the Pasila bridge will be reduced. Wider footpaths and bicycle lanes will be introduced on both sides of the Pasila bridge, and stylish shelters have been built in the Pasila station area. In addition, all of the station’s pedestrian areas are heated. There is parking for 500 bicycles next to the station, and many times more in Tripla,” Verkamo says.

The access routes for public transport users with connections in Pasila are better than usual. The bus and tram stops and taxi stands are all located in front of the station hall. Their areas are larger than before and there is more room to wait.

The station hall that serves train passenger has also been upgraded. Now larger than before, it is directly connected to the adjacent shopping centre.

The opening of Mall of Tripla and the station hall means that the temporary Pasila station can be retired. Demolition work on the facility will begin in January 2020. Most of the work will take place at night.

“The temporary station has served its purpose well. If it hadn’t been built, the old station would have had to be demolished and the new one built in several phases, which would have extended the construction time for Tripla as a whole by nearly two years,” Urjanheimo explains.

A large project that has been met with an emotional response

The construction and opening of the new Veturitie and Mall of Tripla has been met with an emotional response among the city’s residents and the people who use the area. But can the same be said for those who built it?

“I would describe my feelings as a mix of pride and excitement. Not many of the people who worked on this project are likely to be involved in something of this magnitude again,” Urjanheimo says.

According to the City of Helsinki’s plans, work in Pasila and the nearby areas will continue for quite some time yet, but the projects that are now being completed hold a special place in Harri Verkamo’s heart as well.

“What we are seeing this October is the realisation of a number of things we have spent a lot of time planning over the past few years. These are exciting times. I’m sure this is among the biggest projects in all of our careers. You can never anticipate everything that might happen in a project of this size, but the way we react to surprises and new circumstances is crucial. The cooperation between the parties involved in this project has been very smooth,” Verkamo concludes.