We renovated the ski jumping hill as well as the in-run tracks and landing slope. The judges' tower was rebuilt and the old wooden skiing bridge replaced with a new concrete one. 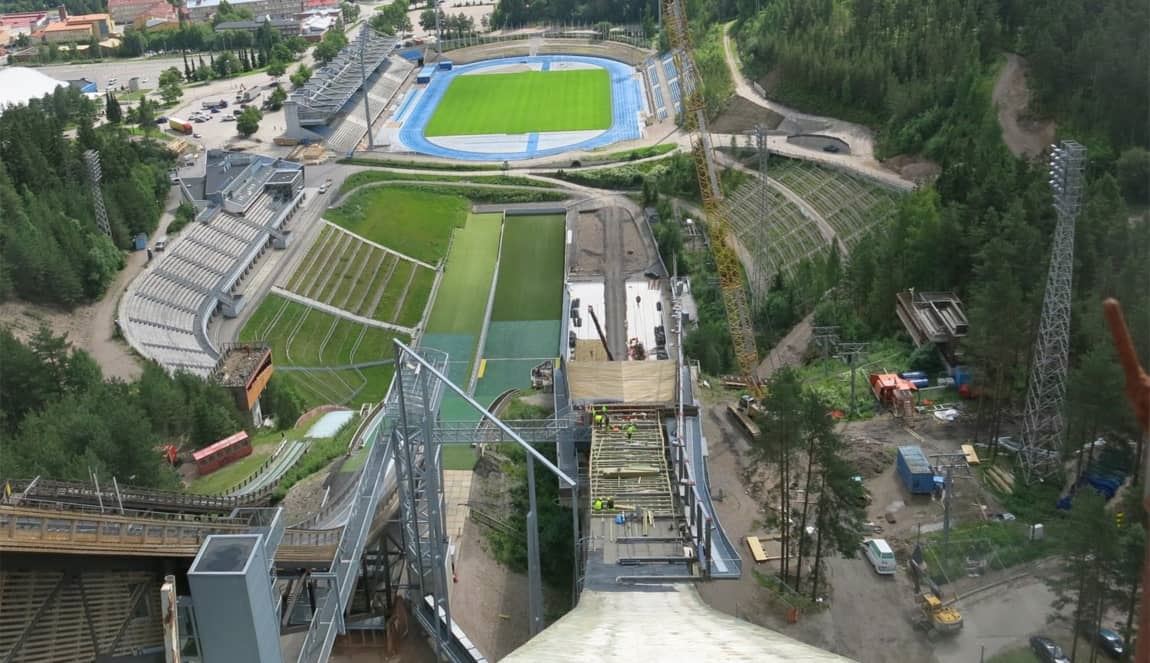 The renovation of the large hill and surrounding structures in the Lahti Sports Centre was part of the preparations for the ski jumping World Championships in 2017.

The Lahti Sports Centre contract included the renovation of the concrete large hill and renewal of the in-run tracks and landing slope. The judges' tower was rebuilt and the old wooden skiing bridge replaced with a new concrete one.

Thanks to the renovation, ski jumpers are also be able to use the 130-metre hill completed in 1971 in the summer, which was not possible for a long time due to the unevenness of the landing slope.

From the point of view of builders, renovating the large hill was extremely demanding – both technically and in terms of occupational safety. The demanding lifts on the steep slope reached up to 70 metres.

One of the key safety principles was that no one was allowed to be under lifting at any time. This required careful planning of work, as there was a lot of lifting and the schedule of the site was quite tight.

Access control was also part of safety, as this made it possible to prevent unauthorised persons from accessing the site at the gate. The same system also served the objectives laid down by the Act on the Contractor's Obligations and Liability when Work is Contracted Out: only a company that takes care of its statutory obligations can bring its employees to the site.

The six-month project started with the demolition of the old wooden structures of the landing slope. The demolition was necessary to be able to reinforce the soil structure, which had depressed up to half a metre at places and was prone to sagging of soil during rain.

Thanks to the piling, the occasional slides will be in control. The Titan-piled embankment was covered with a filter cloth to protect the structure from rain during the installation work. The final surface structure is a wooden deck.

The concrete-structure in-run got a new ice track made of prefabricated elements with a more effective cooling system. With it, the tracks can be frozen economically in conditions up to +10°C. The new technology is also energy-efficient as, unlike before, the cooling will only target the track, not the entire element.

The new concrete-structure skiing bridge is 54 metres long and 18 metres wide. The entire 700-cubic-metre deck casting of the bridge was carried out as a single effort, after which the structure was post-tensioned.

The construction work was part of the preparations for the ski jumping World Championships 2017 in Lahti.