What kids want to know – 37 questions for Jokeri Light Rail

Last autumn, a group of school children visited Jokeri Light Rail’s bridge construction site in Veräjälaakso. The visit raised a number of questions that many of us may be secretly thinking but dare not ask, such as, “Where do you go to the loo?” and “Do you eat doughnuts on the site?”

2. Where did the idea for Jokeri Light Rail come from?
The idea came from the residents and their representatives who feel that bus line 550 is already too congested.

3. Why is Jokeri Light Rail being built?
The railway connection will replace trunk line 550, which is currently the bus line with the shortest headway time in Helsinki. Its transport capacity cannot cope with the growing number of passengers.

5. When was the decision made to start the work?
The Espoo city council approved the new Jokeri Light Rail budget in late April. The Helsinki city council had already approved the budget in March. In May, the alliance parties of Jokeri Light Rail signed the contract on the delivery of the light rail, which enabled the construction to begin in May 2019. 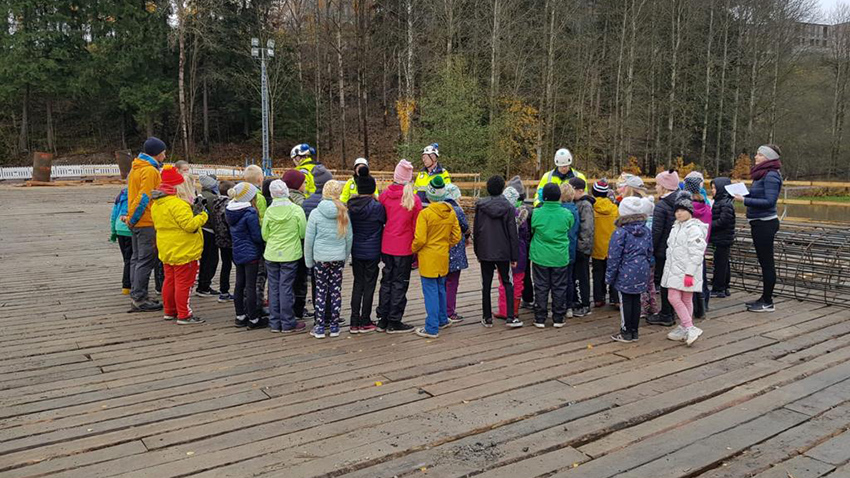 7. How do you get the money to build Jokeri Light Rail?
Espoo and Helsinki pay their share of the cost. The government sponsors the implementation of the railway infrastructure in Espoo and Helsinki.

8. How long will it take you to build Jokeri Light Rail?
The construction will take place from June 2019 to December 2023, after which the railway will be tested. You get to hop on the tram in June 2024. You can read current news from Jokeri Light Rail websites.

9. Why does it take so long?
We have 25 km of track, with quite a few sections of rail to lay down. Before we even get to build our rails, first we have to move water pipes out of the way so that they won’t be buried under the track. What’s more, we can’t build everywhere at the same time because then people would not be able to move anywhere near the construction site.

10. Why is bus 550 not enough?
According to the estimates, there will be approximately 2 million people living in the Helsinki area by 2050, with more than one million jobs. The aim is to direct the increased movement due to the growing population to sustainable ways of moving: public transport, walking and cycling. Currently, bus line 550 is used by 40,000 persons on a daily basis. According to the estimates, Jokeri Light Rail will be used for approximately 91,000 journeys per weekday by 2030. By 2050, the number of journeys is estimated to have increased to 125,000 per weekday.

11. What colour will the tram be?
The trams will be in three colours: white, black and turquoise.

13. How many people are building Jokeri Light Rail?
Hundreds.

14. How is the construction managed?
The construction is managed prudently in cooperation with different parties, that is, the Client, designers and main contractor. For example, they hold planning meetings and other meetings where they make decisions on how to build, etc. The daily work at the site is managed by the project’s area managers and supervisors who hold several weekly meetings to plan the work and its implementation.

15. How is the work going?
In the main, the work is going smoothly. Of course, sometimes surprising things happen on the site. For instance, the surface of the rock may be higher than anticipated, or excavation work may reveal old structures that we were not aware of beforehand. Situations like this slow down the progress of the construction.

16. Do you eat doughnuts?
It’s nice to enjoy a treat sometimes, but not every day. 😉

17. Is it nice to be a builder?
Yes it is! It’s great to see the results of your labour and be able to tell your friend, “I helped build that!”

18. Is construction hard work?
Construction work is very varied. Rush and environmental conditions can make it hard. Nowadays, we have a lot of good machines and tools that make our work easier.

19. How long is a work shift?
A normal working day is from 7 a.m. to 3:30 p.m., but some people work later, even until 6 p.m. But oftentimes they leave earlier on Fridays – or even take Fridays off!

20. Do you work around the clock and at weekends?
We don’t work quite that hard. Sometimes, there may be situations where we have to work at night or at weekend because there is less traffic around the construction site then.

21. If you need the loo, where do you go?
There are portable toilets on the site, if you’re not close to an office building with a traditional WC. 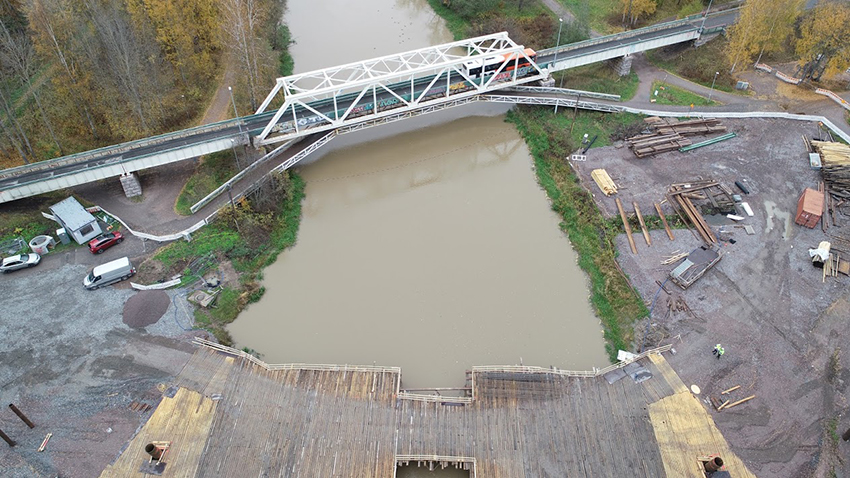 22. How much does it cost to build a bridge?
A lot. The price depends on the bridge, e.g. if we’re building one over water. Smaller bridges cost hundreds of thousands and bigger ones tens of millions.

23. How can you build over all of those pipes?
In order to build the rails, we need to move the surface pipes and cables out of the rails’ way. Moving them is the best option also because if the pipes need to be repaired later, it won’t interrupt the railway traffic. If it is not possible to move the pipes and cables out of the way, they will be covered by steel pipes that protect the structures from things like the weight of the track. There will be several different layers of earth on top of the pipes so that the track structures can be built on the ground level at the final stage.

24. How long are the holidays at Jokeri Light Rail?
Normally, our employees have a total of 7 weeks of holiday per year. In excavation work, a lot of holidays are used in winter when construction is slower and harder due to snow and freezing temperatures.

25. Are there too many construction sites in Finland?
Not at the moment. Even if it can sometimes feel like there are lots of construction sites on your route, overall there are a lot of areas where nothing is being built. Cities also carefully consider when and where it makes sense to build, so that the construction work does not overly inconvenience people.

26. How much are you paid?
The standard wages of the Finnish construction sector. But remember that the most important thing is not money but having nice colleagues and a fun job! 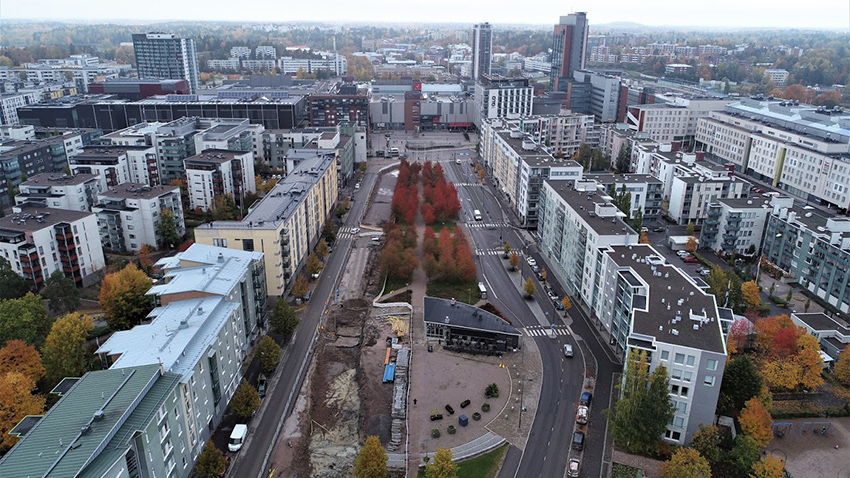 Machines on the site

29. Who pays for the machines?
Jokeri Light Rail pays the agreed compensation for using the machines on the site to the machines’ owners and, for example, for their maintenance.

30. How are the machines brought to the site?
The machines are transported to the sites on a really big trailer pulled by a lorry and then driven off the trailer.

31. What machine is used for building in water?
The simple answer is special equipment, i.e. purpose-built piling machines or diggers used to drive the filling piles in the water. Steel beams are then hoisted on top of the piles.

32. How does the heavy machine stay on the water?
The water has a buoyant force, that is, a force directed upwards.  When a platform that is big enough is set on the water, it can carry a heavy work machine.

33. Do you have a crane?
No, we don’t have a crane permanently on the site. The diggers can lift most of the construction materials in place. If necessary, we can order a truck crane to the site. It can lift heavy things over a long distance.

35. Do you wear helmets on the site?
You must always wear a helmet on the site! It protects your head from impacts.

36. What kind of safety equipment do you have?
When entering a construction site, you must always wear safety footwear, a helmet, safety goggles, hearing protectors and high-visibility protective clothing (bright yellow or orange workwear). Depending on the task, you may also have to wear, for instance, a safety harness (if working high up), respirator or other task-specific protective equipment.

37. Is construction work safe?
Construction work is very safe, as long as you follow the instructions, move carefully and avoid unnecessary risks on the site. Unfortunately, accidents happen, and often they are caused by being careless or neglecting occupational safety. It is really important to avoid rushing around the site and to always follow the instructions. We always take occupational safety very seriously.