The new Kruunuvuori Bridge connecting Korkeasaari and Kruunuvuorenranta is to become the longest, tallest and longest-standing bridge in Finland - and it is also globally exceptional as bridges of this size have not been built for the sole use of public transport, pedestrian traffic and cycling. The bridge thus becomes an interesting attraction not only due to its size, but also due to the advanced traffic thinking behind its design.

In 2012, as part of its World Design Capital programme, the City of Helsinki organised a design competition to design a transport connection from Kalasatama via Korkeasaari to Kruunuvuorenranta. The participants of the competition were selected on the basis of an application procedure, and the most important part of the applications was the Kruunuvuori Bridge connecting Kruunuvuorenranta and Palosaari (i.e. the tip of Korkeasaari).

The aim of the competition was to find a design solution that would meet the functional, sustainable and aesthetic objectives set for the new transport connection. Of the 52 applications, 10 participants were selected. From a very international set of participants, the winning entry was the work of a planning group led by WSP Finland called “Gemma Regalis” (the crown jewel).

The jury of the competition particularly liked the lightness and airiness of Gemma Regalis, which gives open sea views to both those looking at the bridge from further and those travelling on the bridge. The design is also considered to meet the other goals set for the transport connection. 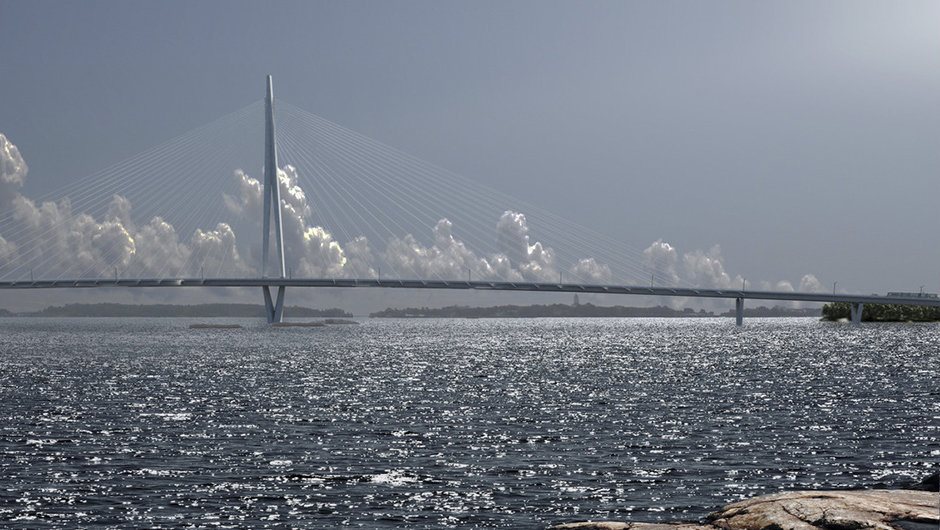 Landmark over the sea

Time will tell if the bridge will be an iconic landmark for Helsinki, like for example, the Brooklyn Bridge in New York or the Pont Neuf in Paris.

In any case, it will be an important transport link that will redefine the concept of the city centre of Helsinki and the location of the homes of thousands of residents in terms of distance from the city centre. The emergence of such a significant new connection is an exceptionally big development for any city.

"Kruunuvuori Bridge also changes the cityscape of Helsinki when completed. However, the aim was to make the bridge, which is more than a kilometer long, light and airy, so that the impact on the landscape would be as small as possible", says Business Area Director Sami Niemelä from WSP.

The central pylon of the bridge rises to a height of 135 metres and can be seen from far away at any time of the day.

The bridge's crossing height on the main boat channel is 20 metres. This means that not all the largest sailing boats can cross under the bridge, but the majority of the boats on the Herttoniemi pier can sail on the Kruunuvuorenselkä as before.

The bridge is also crossed by another boat channel at a slightly lower crossing height, further away from the islets Isäntä and Emäntä. This makes it possible for motor boaters to take into account the nesting time of birds and to get around the islets farther.

Sailing competitions have been organised on Kruunuvuorenselkä. The city has offered substitute areas for such activities. 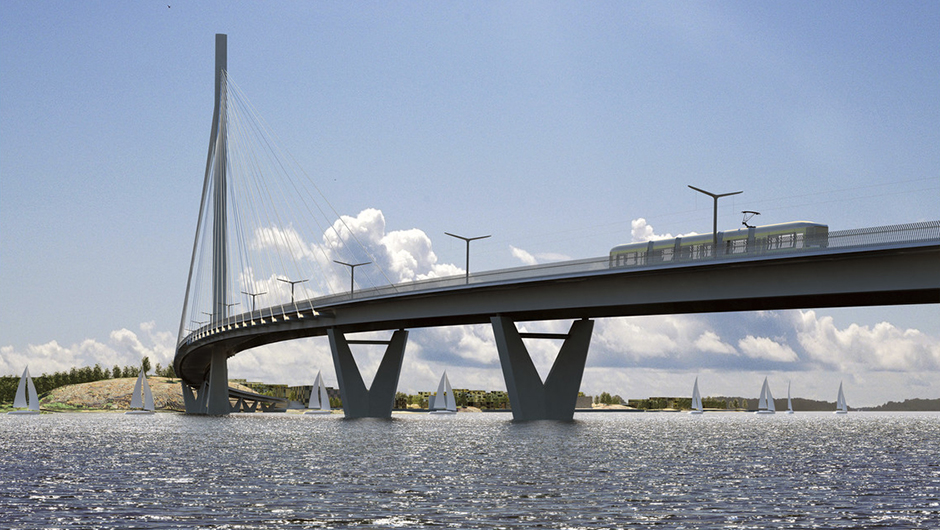 The Kruunuvuori Bridge is therefore record long and high, but it is also exceptionally required to have a service life of 200 years.

"Such long service life requirements have not previously been set for such bridge structures in Finland", says Niemelä.

"The 200-year service life is for the whole bridge – of course, some structures are intended to be renewed, but others are planned to last 200 years. Such structures include hard-to-repair load-bearing structures such as pylons, intermediate supports and deck steel beams."

For example, a service life of 200 years places new demands on concrete: it must withstand exceptionally well the stresses caused by both frost and seawater. Offshore concrete structures are particularly vulnerable to the adverse effects of seawater and repeated freezing and thawing on the durability of concrete.

The so-called infrabetons currently used have a service life of 100 years. In practice, the service life required for the Crown Bridges means that concrete manufacturers have to develop new types of concrete.

"This type of new, long-life concrete has just been used, for example, in the Atlantinsilta bridge in Jätkäsaari, but not in many other projects", says Mikko Sipiläinen of the TYL Crown Bridges consortium.

For steel structures, durability is sought through design solutions: careful planning and implementation of details avoids structural solutions that would cause steel fatigue, for example. 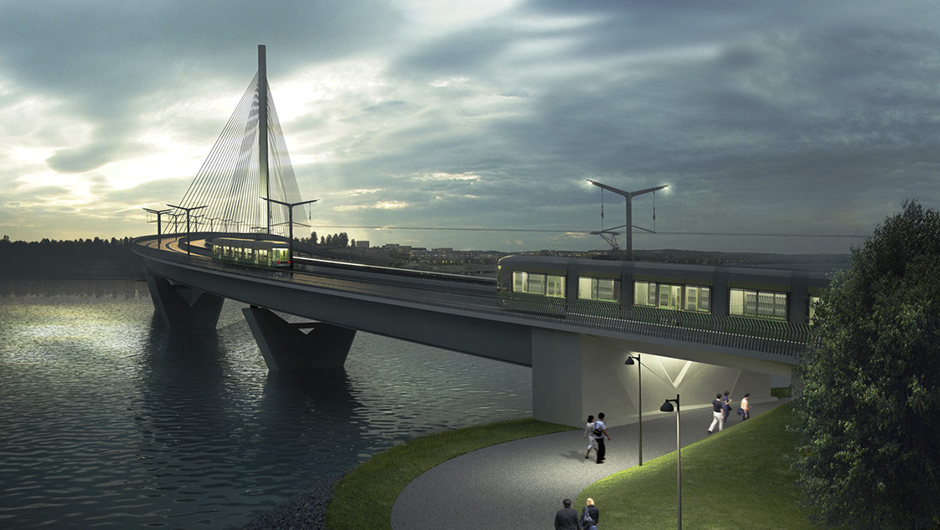 The design of the Kruunuvuori Bridge has had to take into account other special features of this bridge. For example, the design methods and load definition have had to be developed alongside the actual design, as there have been no established design standards for tramway loads, similar to train and road loads.

"In addition to this, a lot of attention is paid to the maintenance and upkeep of the bridge in the design. It must be not only durable, but also easy to maintain and service", says Business Area Director Sami Niemelä from WSP.

"The material and structural solutions must therefore be not only resistant to environmental stress, but also such that any renewable structures and equipment are easily accessible in places."

With regard to winter maintenance, the bridge will be made in such a way that its mechanical maintenance is easy and quick.

The careful design of the bridge is illustrated by the fact that more than 150 people from WSP have been involved in the various stages of the design since 2013, and the design has been taken a total of about 100,000 hours. 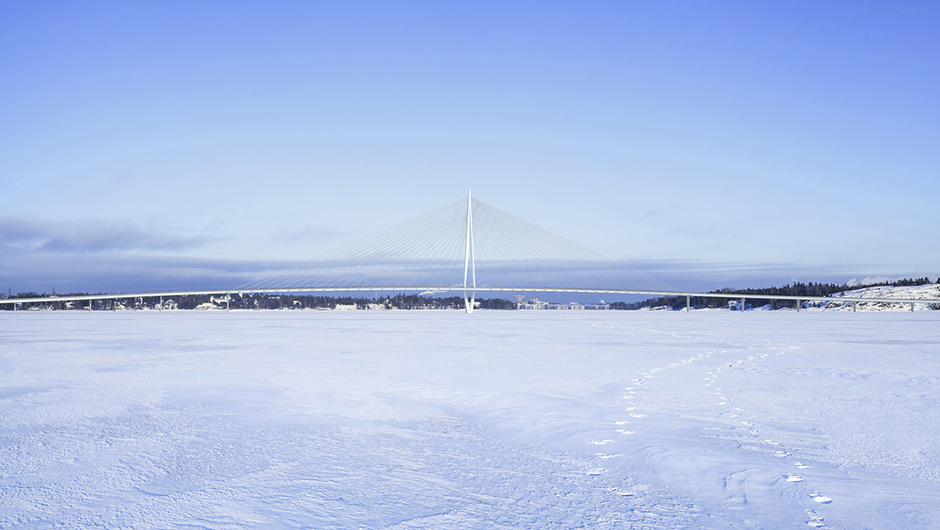 Ice on the cables?

Others than bridge engineers have also wondered whether the steel cables on the bridge could accumulate ice during the winter, which would, in a worst case scenario, fall in large pieces on the bridge users. There have been accidents of this type in North America, for example.

"We have studied this issue a lot during the design. Fortunately, there are such cable-stayed bridges around the Baltic Sea, i.e. in a similar climate, so user experiences are available. In the design, we have examined the kind of weather conditions in which ice could form on the cables. It seems that a calm autumn night, with the temperature at zero, could be such a condition", says Niemelä.

"On the other hand, the climate in Northern Europe is different from that in North America, and no ice has accumulated here on bridge cables to the same extent as there."

In any case, the design of the bridge also takes this potential problem into account in many different ways. The control and monitoring system of the bridge can be made as one that also monitors any ice that may form on cables. In addition, some kind of additional warning system will be introduced just to monitor ice formation.

"It could be, for example, a weather camera in the pylon of a bridge, or a system that would monitor data from the Finnish Meteorological Institute and warn of a particular weather condition. There are also sensor systems we could use", says Niemelä.

Not only can ice formation be monitored, it can also be prevented. The patterning of the surface of the cables has been found to have an impact on how ice begins to form. The steel cables of the Kruunuvuori Bridge will be covered with a plastic pipe, which will have a surface pattern that will cause the ice to fall down as flakes.

"We also have a plan for how the ice formed on the cables could be removed mechanically, if necessary", Niemelä says.

On the seashore it is almost always windy, and in winter you really feel frozen to the bone. Is it too cold to walk on such a long bridge over the sea in the Finnish winter weather?

"You probably won't stop and enjoy the scenery in winter for a very long time, but we do try to protect those moving on the bridge from the worst wind gusts", Niemelä says.

"There will be a wind guardrail at the south edge of the bridge, where the walking and cycling paths are located. Winds usually blow from the south, so the guardrail should protect pedestrians and cyclists to some extent."

From the point of view of a bridge traveller, wind conditions are certainly not always pleasant, but on the other hand, they are not unbearable. And, of course, you can always hop on a warm tram in Kruunuvuorenranta or Korkeasaari; there will be no stops on the bridge. 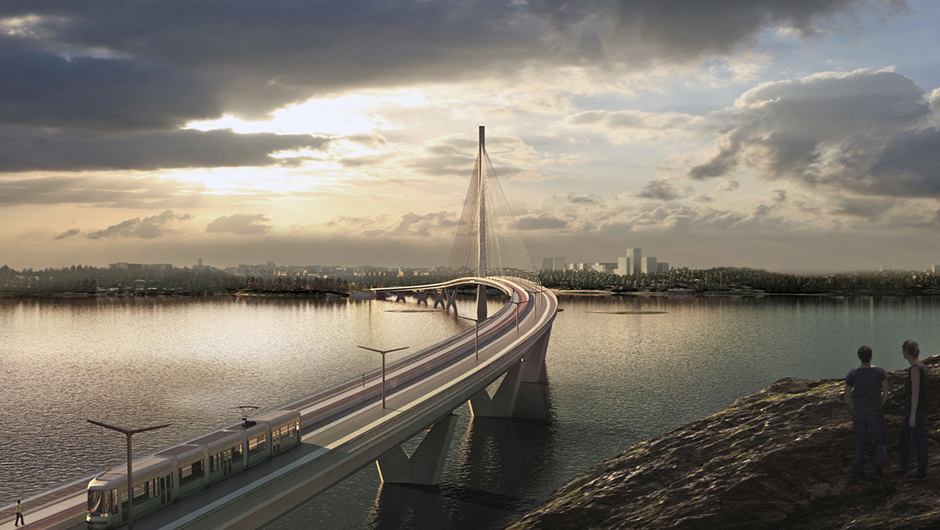 Naturally, the new transport connection will have effects on its environment other than a change in the landscape.

"There will certainly be some noise from the light rail traffic on the bridge, but on the other hand, there will be noise reduction on the rails. The disturbances during construction are greater for both the residents and the environment than during operation", says Niemelä.

For example, in Korkeasaari, bridge construction work requires dredging and embankment filling. These work phases cause vibration and noise nuisance to both people and animals.

"The Crown Bridges project commits to carrying out all construction work responsibly. A large number of environmental studies have already been carried out at the planning stage, which guide both the planning and implementation", Niemelä says.

For example, environmental restrictions imposed on the project affect work at different times of the year. Dredging is done in winter to avoid disturbing the nesting of birds or the spawning season of migratory fish. Water turbidity must also be taken into account in the planning of construction work, and dredging is done with the help of booms, so that turbidity does not spread outside the area to be dredged. During the nesting season of the birds, safety distances are used on islets, in which case work is done outside them to ensure nesting peace.

"We strive to do the work as efficiently as possible with minimal disruption. Our aim is not to make noise and work is done within the framework of a noise permit, but for example piling echoes far over the sea and makes noise. The noisiest phase lasts about six months and it will take place in the first winter of 2021-22", says Jari Humalajoki of the TYL Crown Bridges consortium.

During the busiest stages of construction, about 150-200 people will be working on the TYL Crown Bridges consortium. In the project, WSP did the building design for the City of Helsinki. Ramboll and SOFiN Consulting are responsible for the installation and engineering workshop design of TYL Crown Bridges. 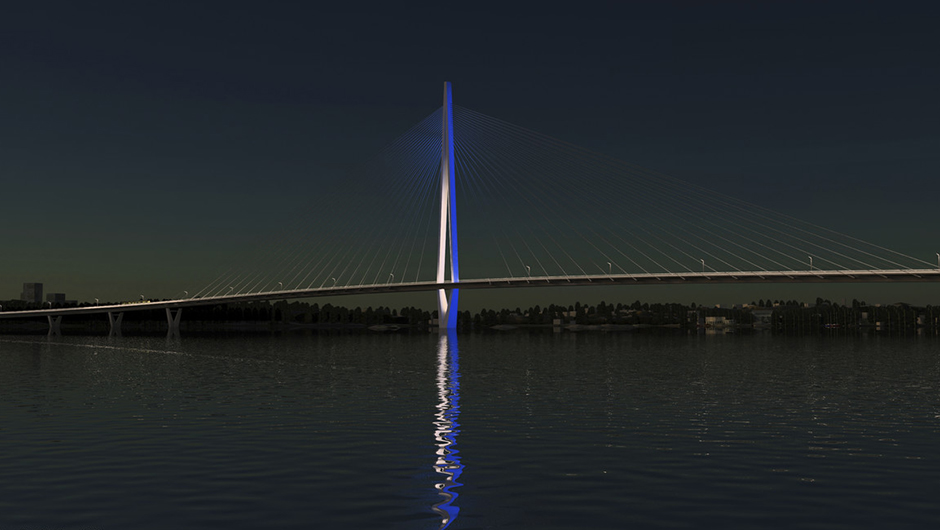 The Crown Bridges tramway project will be carried out as a combination of two contract forms: The two bridges between Kalasatama and Kruunuvuorenranta, Finke Bridge and Kruunuvuori Bridge, as well as the construction in the land areas in Korkeasaari will be realised as an all-in contract.

"It is unique to be part of such a building project. Not many of these things happen during one generation. I believe that, for example, data modeling will move forward in the construction industry thanks to this project", says Mikko Sipiläinen of the TYL Crown Bridges consortium.

"By combining our efforts, we have brought together the best experts from two companies, YIT and Kreate, into the project. Both companies have their own strengths and we complement each other in this work consortium. Innovation is part of the culture of construction, and we will certainly find new ways of working even better in this project", Jari Humalajoki says.

The Crown Bridges alliance has started preparatory work in Hakaniemi, Siltavuori and Kruunuvuorenranta in spring 2021. At the moment, the work areas are expanding strongly, especially in Hakaniemi.

There are many bridges to build in the Crown Bridges project, and that is great as bridges always create direct, fast and user-friendly connections to different modes of transport.