Helsinki is getting a new bridge in Hakaniemi as part of the work of the Crown Bridges alliance because the original bridge, completed in 1961, is beginning to deteriorate. The need to replace the bridge marks the beginning of the redevelopment of the entire area, with both sides of the bridge boasting shoreline suitable for leisure and recreational use. At the same time, the facilities for pedestrians, cyclists and public transport will be improved.

The construction of the Hakaniemensilta bridge will start in February 2022. If everything goes according to plan, the new bridge will open for traffic in late 2024. Preparatory work in the area has taken place since the spring of 2021. One of the most important preparatory tasks was to move the pressurised sewage pipe next to the new bridge line.

The lower bridge also means a more comfortable environment for cyclists and pedestrians. The new bridges and connections in Hakaniemi are especially designed with cyclists and pedestrians in mind, in addition to public transport. The new cycling arrangements in the area are in line with the objectives of the cycling path network in the inner city.

The Hakaniemensilta bridge will have two lanes for cars in each direction. 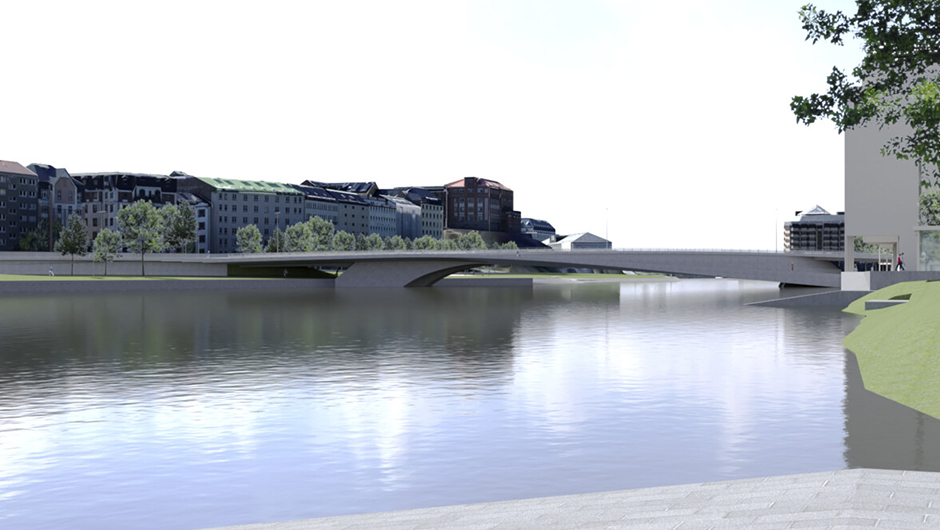 The opening of the bridge is approximately 100 m, and the maximum height of a vessel passing under the bridge is 4.7 m. The current bridge accommodates boats that are a few metres higher.

Because of the architecturally challenging parts of the bridge, the design was harder than anticipated. That said, the progress has been such that the construction can now start.

Overall, the bridge will take the Crown Bridges alliance approximately three years to construct, taking into consideration the demolition of the current bridge. The demolition of the old bridge can commence as soon as the new bridge has been successfully commissioned. The construction site takes a long time because, in such a densely built area with heavy traffic, everything affects everything. The new junctions alone take a lot of work because there is a vast amount of municipal engineering under the streets. The work also requires traffic arrangements for cyclists and pedestrians, both on the old bridge and on both sides of the Siltavuorensalmi strait.

The work will kick off in February 2022 with the demolition of the coastal walls as well as dredging at the location of the bridge on both sides of the Siltavuorensalmi strait. The old pressurised sewage pipe will also be dismantled.

In addition to the demolition of the old coastal structures and dredging, the first construction stages on both shores include building a work bridge and foundation work: pile driving, sheeting, anchoring as well as formwork, reinforcement and concrete work.

Land reclamation will take place towards Hakaniemenranta. On the Hakaniemi side, the support of the new bridge will be over the current sea, and its whole structure will be anchored to the bedrock with tensioned steel cables. On the other side of the strait, the bridge will simply “rest” on the foundations. In Siltavuorenranta, the seashore will be moved: the shoreline will be moved closer to the houses. In the future, the Siltavuorenranta street will no longer exists on the shore.

The key structure of the bridge is the supporting structure on the Hakaniemi side, on which the bridge is built and to which it is attached so firmly that it would stay in place even if the foundations on the Kruununhaka side were to be dismantled.

The whole spring and summer of 2022 will be spent laying the foundations. As things stand, the assembly of the steel frame of the bridge over the sea will begin in September. The frame stage will last approximately five months.

Once all of the tensioned cables have been completed and the frame is finished, the construction of the bridge deck from Hakaniemi will start in 2023. The deck will be cast in such a way that the roadway decks are cast first for the entire length. Then, the pedestrian and cycle lanes will be cast on both sides in approx. 10-metre blocks. The roadway decks can be cast at once because they rest on steel beams as a “joint structure” and the cast makes the whole structure rigid. However, the pedestrian and cycle lanes must be cast in blocks because they are ledge structures supported by the roadway structure.

The casting of all of the deck structures should be completed during 2023. After that, the surface structures can be made: waterproofing, tarmacking, railings and pavements. The finishing work alone will take approximately one year and it will continue even after the bridge is already in use, in terms of the underneath cladding structures. Therefore, the plan is for the bridge to be in use by the end of 2024.

The Crown Bridges tramway project will be carried out as a combination of two contracting models. The two bridges between Kalasatama and Kruunuvuorenranta as well as the preconstruction in Korkeasaari will be realised as an overall contract. As the contractor, the City of Helsinki chose a consortium of YIT and Kreate. The rest of the construction of the connection will be carried out by an alliance that also includes YIT. The other parties of the alliance include the City of Helsinki, NRC Group Finland Oy, Ramboll, Sweco and Sitowise.