YIT can offer university and vocational school students just the right path for a variety of careers.

Many young people starting their careers worry about whether they can learn by working in a new job. When browsing job advertisements, the impression one gets is that the candidates are expected to be experts in the role they are applying for – when, in fact, they cannot possibly have accumulated enough experience. In the construction industry, the situation has traditionally been different and still is today. One example of this is YIT, which serves as a kind of university – especially through large projects – for future construction professionals.

Roughly 850 young people become acquainted with the diverse construction industry each year through YIT’s summer jobs and traineeships. Up to half of them continue at YIT the following summer, in hourly employment during the academic year or in a permanent employment relationship after graduation.

In recent years, a total of one hundred young people have been learning the ropes at Tripla, the largest construction project in Finland’s recent history, in Pasila, Helsinki. The total area of Tripla equals a whopping 50 football fields. It consists of a shopping centre, multistorey car park, public transport station, apartments, a hotel and an office block. You could not find a more diverse working environment in the construction industry if you tried.

Atte Yppärilä, Martin-Fredrik Rikkinen, Rosa Ruokonen and Maarit Martin are young professionals in the construction industry today, but a few years ago they were trainees at Tripla at the same time. On the large site, each one of them worked in a different role, but all of them experienced an excellent team spirit.

“The best thing about the internship was that I was given my own area of responsibility and got to make decisions that affected the outcome. It was not at all intimidating, as there was always a support network around me.”

“During my engineering studies, YIT was often featured at corporate evenings and events. As the largest player in the construction sector in Finland, YIT was already a familiar name to me, of course.”

Ms Ruokonen, who grew up abroad in Dubai and other places, began her training as a procurement engineer trainee in 2018 at the same time as Ms Martin.

“I learned to read construction plans, and by following the contract negotiations, I began to understand how procurement engineers interact with contractors. In meetings, you could really learn a lot just by listening. These skills are not taught in school,” Rosa Ruokonen says.

In January 2020, Ms Ruokonen moved on to the Trigoni project to complete her master’s thesis.

“In June, my employment became permanent, and in July, I completed my studies. In Trigoni, my job is really interesting. My duties are related to the management and coordination of planning functions, and I am also involved in a variety of development tasks.” 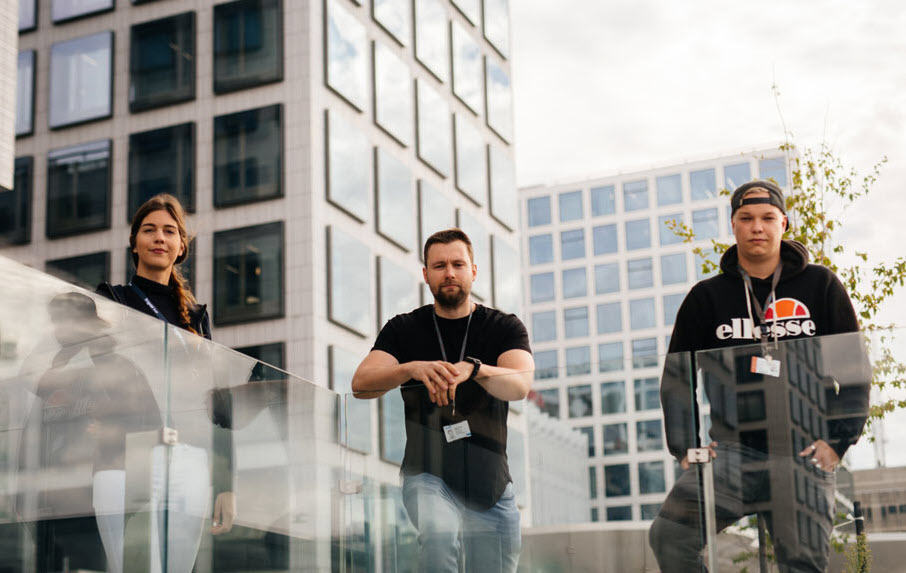 For many students, the blue-collar traineeship is the first contact with the construction industry

Blue-collar trainees get to learn the ropes of the construction industry with the help of a designated tutor. The trainees become familiar with occupational safety, the vocabulary of the industry and the various tasks on the construction site. Many who have already moved on to other tasks, such as supervisory duties, look back on the training period fondly and recommend it to anyone interested in the field.

One of them is Atte Yppärilä. Mr Yppärilä first heard about the opportunities at YIT from his parents, who both have had long careers at YIT. He is studying industrial engineering at Metropolia University of Applied Sciences and began his blue-collar traineeship in the summer of 2017.

“I worked mostly as an assistant to the carpenters in the station block of the Tripla site. The training period provided an excellent basis for moving to supervisory roles later on after you had obtained first-hand experience of the work,” says Mr Yppärilä, who has subsequently been appointed a site supervisor trainee for the Perkkaa school and youth centre project.

Normally, YIT’s path for university students always starts with a blue-collar traineeship, but if the student has already completed a significant amount of their studies – like Ms Ruokonen – they can move directly to the second stage of the traineeship. YIT also receives job applications from students with a vocational school background and students who already have previous work experience in the construction industry.

Martin-Fredrik Rikkinen, currently a foreman at YIT, had been working as a builder since 2009, five years before he started his bachelor’s studies in the master builder programme. Mr Rikkinen started as a site supervisor trainee on the Tripla site in spring 2017.

“I started working as a site supervisor trainee, but I was soon given duties with lots of responsibility and the ‘trainee’ part of the title was dropped after the summer. I believe that the vocational studies gave me an advantage that an upper secondary school student does not have. Of course, the school can provide a good starting point for the industry, but the rest has to be learned from hands-on work on site.”

After Tripla, Mr Rikkinen moved to housing construction in the role of foreman. He is currently working in the Rosanne and Berttina housing projects in Konala, Helsinki.

“The best thing about the internship was that I was given my own area of responsibility and got to make decisions that affected the outcome. It was not at all intimidating, as there was always a support network around me.”

YIT is the ideal employer for engineering students

In addition to the work itself, YIT’s ex-trainees fondly recall the summer season kick-off and end parties that were part of the training. Maarit Martin mentions the YIT Studies training group in which she participated. It is a five-credit study package organised together with seven universities of applied sciences and TUNI, which delves into the construction industry through contact study periods and independent work. Approximately 30 students are selected for the programme each year, and a new course starts each spring.

“I participated in it towards the end of my studies. The participating students were from different parts of Finland. During the course, we visited a construction site, where we delved into the theme of schedule management. We also visited YIT Head Office,” Maarit Martin explains.

According to YIT trainee feedback, up to 97 per cent of the respondents are willing to work at YIT in the future. It is no wonder, as YIT is the ideal employer in the construction industry for engineering students (Universum Student Survey 2020).

All the interviewees of this article continued at YIT after their first traineeship. You can find more career path stories here.

If you are interested in training and summer job opportunities at YIT, please visit the career pages for students.