Surveying keeps the tram on its tracks

A basic part of any construction work, land surveying is usually carried out in three different stages of infrastructure projects. When planning a construction project, in this case a linear light rail project, initial data is collected by performing various surveys in the area. The next important surveys take place when the plans are complete and the next step is to put the plans into practice at the actual location. As some of the work phases are completed at the site, it is time for the third survey, which ensures that each phase has been performed with high quality and that the end result is in line with the plans.

If you have visited Helsinki’s Kruunuvuori, Yliskylä, Kaivokatu or Hakaniemi in the summer or autumn, you may have noticed people dressed in high-visibility clothing, staring through what looks like a telescope and peeking into rainwater gullies. Those people are there to survey the field for the Crown Bridges tramway – but why? Are there not already enough drawings, plans and information on a densely built urban area such as Helsinki for planning a new project?

Sure, there is plenty of information, but it is not enough. Every block of the city has been surveyed over time, and metal nubs fastened to the streets, walls and bedrock are used as points of reference with their precise coordinates. The points and the surveys carried out using the points are compatible for the area in question and are usable in one block, for example, but they may not be viable for use in a more extensive area.

“We could compare the collection of initial data to building things using Lego bricks. The plan for the entire project must be scaled for Lego bricks and the foundation, in other words, the basis for measurement, must be compatible with them. You can’t suddenly plan a part of the project to be built with Duplos, just like you can’t fit an apartment building on a plot designed for a one-family house”, says Jari Pelkonen, supervisor of alliance land surveys in the Crown Bridges alliance.

A linear tramway, such as the Crown Bridges tramway, needs a basis for measurement that is compatible all down the line. Once the basis is in order, another necessary tool for planning is the initial data that the contractor can lean on in both the planning and the construction stages. At the moment, cities are not maintaining a consistent basis of measurement.

“A consistent basis of measurement is the key to a successful project. Any quality assurance in a light rail project such as this is related to surveys and measuring points,” says Pelkonen.

In the survey process, the location of the surveying device in relation to the focal point is first determined, after which the device observes the targets of measurement and records their locations. The goal is not to survey the entire area all over again but only the parts where the new plans must be coordinated with existing structures.

What exactly is it that gets surveyed? Ground elevations, the location of the edge of the road, the locations of wells and pipelines, trees, fences – anything that may affect the project. The most important piece of information is the surface profile. A tramway, for example, cannot be built on steep inclines or hills, and the planning department must be able to account for such factors. 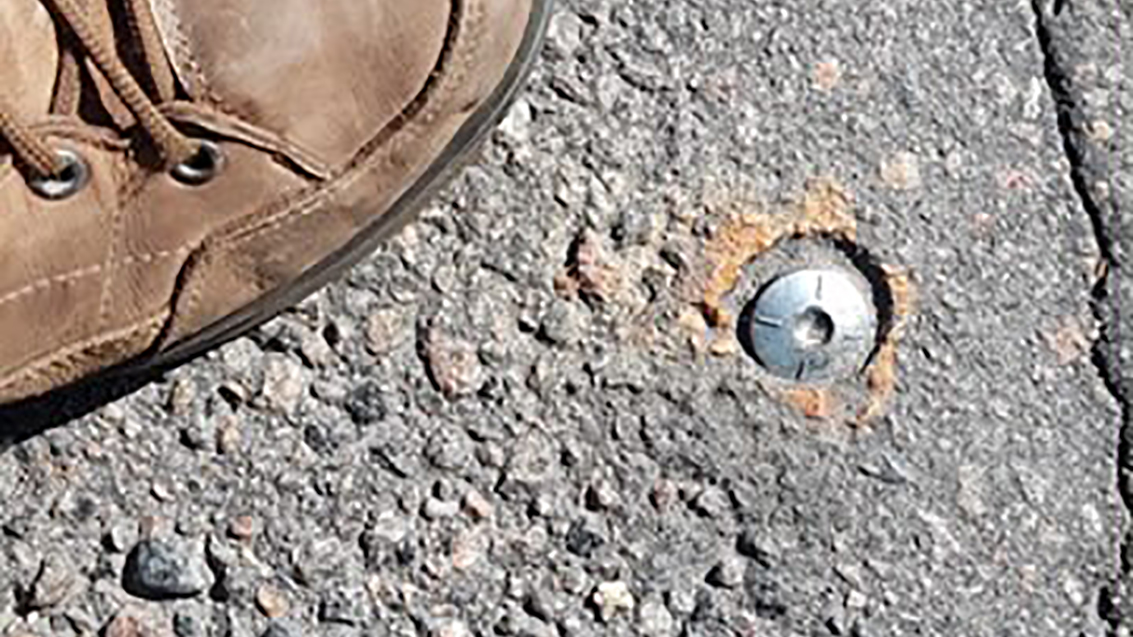 Placing a finished plan (a construction project) on the terrain

Thanks to exact measurements, all the prepared plans are compatible with the real world. As a result, tramway rails constructed from two opposite directions can be seamlessly fit together when they meet, and rainwater can be made to flow in the right direction in the sewers under the tramway.

The designers hand the plans over to the constructors who check them. The plans are transformed into the constructors’ as-planned models. So far, the plan has only existed on a computer, but now it is ready to be implemented at the site. There are two options for this: machine control or the traditional staking-out method.

In simple terms, machine control means equipping a modern construction machine, such as an excavator, with a computer to follow the as-planned model. The movements of the machine are then controlled or guided according to the plan. However, the operator plays a key role as the urban environment, in particular, contains various elements of uncertainty: the area may be full passers-by and it may be impossible to know the locations of all the old piping in the area.

“If we were to use a fully automated machine, the entire area would need to be sealed off and we would have to completely eliminate the risk of anyone stepping in front of the machine while it’s in operation. Of course, automated operations are perfectly fine in enclosed spaces, such as mines,” says Jari Pelkonen. 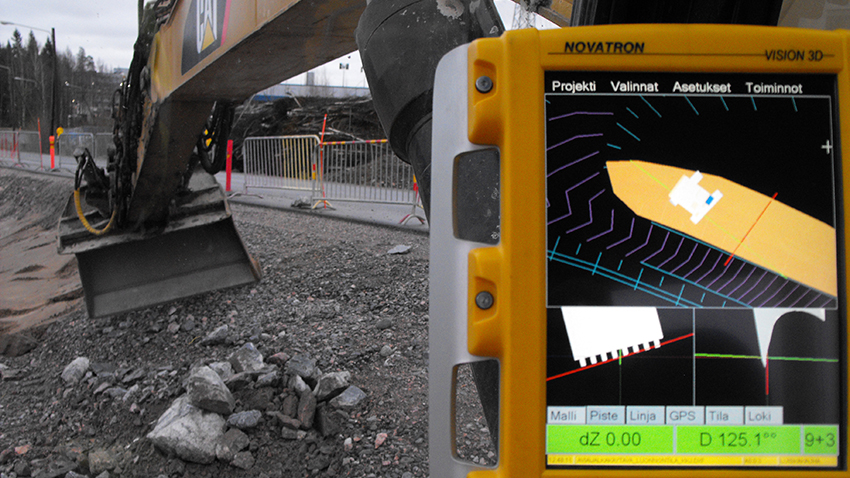 Machine control is mostly used when the plan is to dig or fill up a hole of some kind; work that requires excavations, filling, structural street layers or other soil structures.

However, not all roadworks can be carried out with machine control. Traditional tacheometric and GPS surveys are still needed. They are used to measure the locations of border stones and other surface structures, wells, rails and some technical systems, for example. These measurements are called staking out and include surprisingly traditional means of physically marking down the plan in the area.

“If we need to mark the location of the formwork for the foundation of a bridge, we stake out the corner points and highlight them using spray paint, for example. This doesn’t require overly meticulous work, but once we start moving higher up the bridge structures, the measurements and markings need to be more specific,” says Pelkonen. 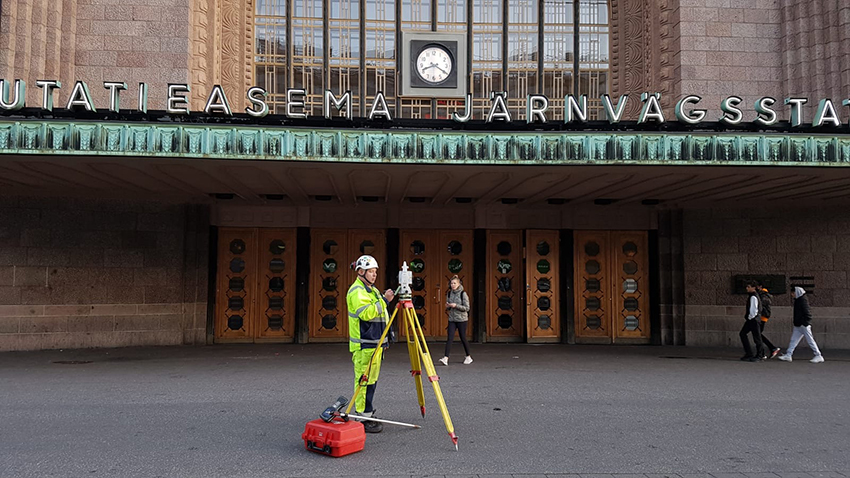 At the start of the actual construction project, the plans or as-planned models are placed in the area either by means of machine control or traditional staking out.

The use of high-quality initial data in the planning and thorough inspection of the plans means that the work can also be performed in a high-quality manner. The quality of each completed work phase is ensured by surveying. At this point, an infrastructure project such as a tramway uses three methods of surveying, depending on its purpose.

The first method is machine control. This method is possible if the purpose is to survey a hole of some kind; for example, the bottom of an excavation dug for a new sewer. The computer on the construction machine, such as an excavator, can be used to display the plan during the work and to collect realisation data as the work is completed. The same applies to structural layers processed by a machine, for example.

However, machine control cannot be used to measure quality when using a technical system, such as the sewer in the excavation mentioned in the previous example. Its construction has been started by having the surveyor first mark the location of the sewer drain in the area and informing the construction team of the objective height for the bottom of the pipes.

“In the end, realisation data refers to the information produced by the machine control and the surveyors,” says BIM Specialist Jari Pelkonen from the Crown Bridges alliance.

In a light rail project, the third and the most precise quality assurance task is related to making the tramway as level as possible. The track is built bit by bit and in different points of the route at the same time. In the end, all the rails will be connected, forming a consistent, seamless tramway with no dents or unnecessary turns. Achieving this is the most meticulous and challenging task in the entire tramway construction project and requires various surveying tools. The work also requires continuous monitoring; simply surveying the route at the beginning and the end will not suffice. 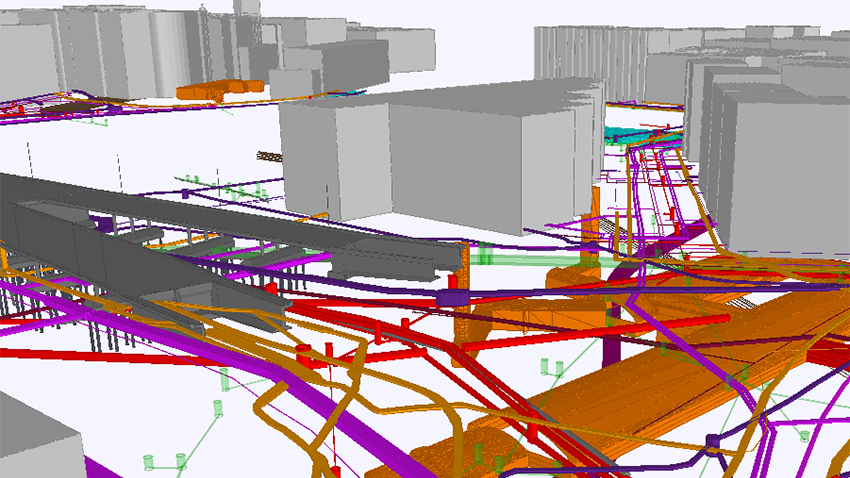 Surveyors know the difference between perfection and practicality

In the surveying of infrastructure projects, however, precision down to the millimetre is not practically possible or even desirable.

“Surveyors are not afraid to admit that they make mistakes. A completely flawless survey is impossible. It takes professional skill to estimate the scale of the error, in other words, complete the work in a way that fulfils the desired quality level. If you can’t control or understand the scale of the error, the rails won’t meet and the water will flow in the wrong direction in the pipes,” explains Pelkonen.

Once you are able to control, trace and predict the scale of the error, you can live with it.

“In this type of demanding infrastructure project implemented in a densely built area, surveyors play a crucially important role. People at the site immediately notice if the surveyor is missing as everyone is eagerly waiting for them to provide the necessary information,” says Pelkonen.

The survey data collected throughout the phases of the Crown Bridges project will be saved as there will most likely be more construction projects in the area in the future.

“In the Crown Bridges project, we aim to ensure that any plan and realisation data collected for the project will be usable as initial data in future projects,” says Pelkonen.

Originally published in three parts on the social media channel of the Crown Bridges tramway in September and October 2020.