The traditional slip forming technique has kept its place as the best construction method in many high-rise projects for more than a hundred years now. As the people skilled in this technique near retirement, the risk is that there will be no-one to follow them.

Finland probably doesn’t have that many groups of professionals whose members can be counted roughly on the fingers of both hands. One of these groups is poorly known and seldom mentioned. The same cannot be said, however, of their work, which is hard not to notice.

Whenever tall structures – and particularly very tall structures – are being built in Finland, this 10-man-strong team is on site. When that happens, their working days can easily stretch to 12 hours, rain or shine. Some 4–6 weeks later, though, and the site will be home to a new landmark.

The smokestacks of factories, iconic water towers, the stem of the Näsinneula observation tower, the former head office of Neste (and subsequently Fortum), and the grain elevators familiar to rural areas... All of these are connected by the fact that they were constructed using the slip forming technique, a technique that is more than a hundred years old and still based on solid manual skills. Over time, technology has changed the nature of nearly all work, but slip forming is still done with the one and only correct and known method.

Carpenter Seppo Suonia and Construction Manager Vesa Helkiö are veteran slip forming professionals and have worked together for decades. Suonia has worked at heights for 32 years now, and the same amount of time for YIT. Helkiö, on the other hand, has twenty years worth of experience in slip forming and working at YIT.

“I’m now YIT’s most long-standing worker in this line of its business. All of my old co-workers have retired by now,” says Suonia.

The skilled workers in this line, such as Suonia, are getting on in years, and many are looking at retirement soon. At the same time, their concern over who will keep up the tradition of their small and proud team is growing.

The youngest member of the slip forming team, 30-year-old carpenter Mikko Ahonen, says that the best part of the job is that you can always learn something new.

“What’s so fascinating about this work is that every project is different and you never stop learning. Even though the work is sometimes hard and there are plenty of travel days, I’d rather go to some remote village than to a big city,” says Ahonen.

When working shifts around the clock, you need to be mentally and physically strong. According to Ahonen, general construction skills are useful, but you will learn as you go.

“To be good at this job, you have to be versatile and not hesitate to take on different tasks.” 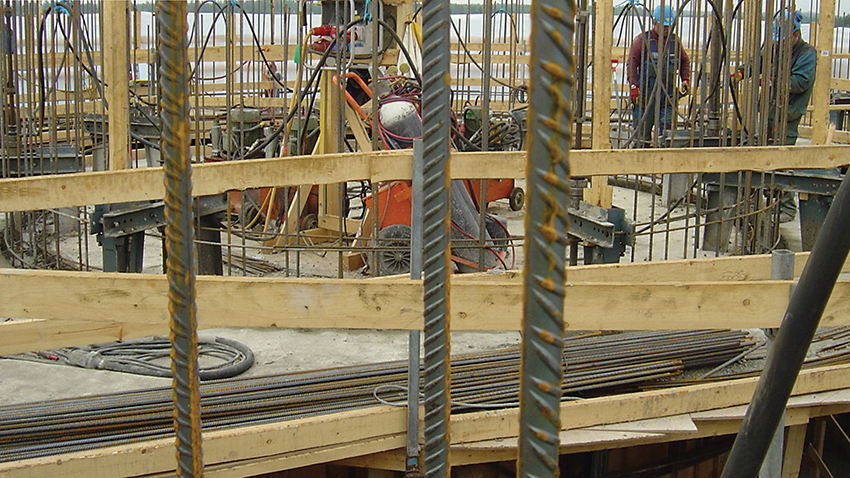 Slip forming is a fast and cost-effective, yet underused method

A fear of heights is not something you should suffer from when working in fairly confined spaces at heights of up to 150 metres. While slip forming starts from terra firma, it always ends up at a minimum height of several dozens of metres. Projects under 25 metres are usually carried out using other construction techniques.

On the face of it, slip forming is an extremely simple technique. The form, which varies in terms of its size and shape, grows at a daily rate of roughly five metres, together with the scaffolding carrying the workers. As the form ascends, the team works continuously to make a structure, such as a chimney or staircase tower, out of concrete and iron. The work is continued nearly non-stop until the structure reaches its planned height. After that, the form, along with its scaffolding and tools, is lowered down.

Despite the technique’s simplicity, slip forming is nothing if not challenging.

“Stopping, or a pace that’s too slow or fast should be avoided. The temperature and quality of the concrete must be controlled at all times since changes can be seen in the finished work immediately. Cooperation between all workers needs to be seamless,” says Suonia.

Although a slip form can be done non-stop and without a construction joint from start to finish, this is not how it is usually done in practice. Usually, the work is carried out in two or three shifts, in which case the working days are either 12 or 8 hours long. When one shift finishes, another takes over without interruption. For weekends, the work is often interrupted, unless the engineer requires otherwise.

“The selection of other techniques has become slightly more common, given that the new and younger supervisors are not necessarily knowledgeable enough to ask about or design the project as something to be implemented as a slip form. If you have no experience of slip forming, you often opt for the alternative which is considered safer, but which is slower and more expensive,” says Suonia. 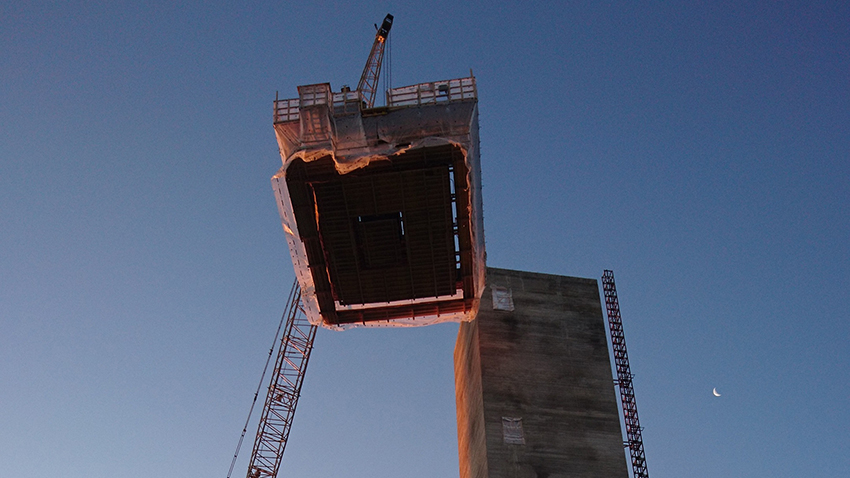 The job, suitable only for a few, is in desperate need of more professionals

As it stands, the future of slip forming in Finland is uncertain. There is no getting around the fact that the number of people skilled in slip forming in the country is very small. Not that they’ve ever been that great in numbers to begin with.

“There’s about 10 of us in our team and, as far as I know, our only competitor in Finland has a team of roughly the same size,” says Suonia.

“This is not something you can learn at school. The only way to learn it is through a journeyman–master craftsman model,” says Helkiö.

The work is also genuinely heavy and, according to Suonia and Helkiö, ill-suited for family life and free time. When you’re not on site working, you spend your time on the road, heading for other sites all across Finland.

“You’re always in a rush to start the job, carry out the slip form, finish the job and move on to the next one,” says Suonia.

Even now, there is a need for skilled workers who could take over as older workers retire. Suonia and Helkiö say that there’s room in their team, but only a little – or then again, perhaps enough, after all.

“There’s no need to be that skilled at this point, really. What you do need is to be interested and committed to this job, and tenacious, too. That’s because of the professional pride this team has in its work: we always do the job as well we can,” says Helkiö.

This is how a slip form is done

Stage 1
The form’s engineering, prefabrication and transport to the site intact

Stage 2
The form’s installation, organisation of slip forming logistics and making reservations for doors and windows

Stage 4
The removal of the form