There will continue to be demand for rock-solid construction expertise in the future, but the transition from traditional to modern skills gives rise to new professions in the industry.

“Advances in technology have given us better bucket loaders, cranes, drilling jumbos and other powerful equipment. However, there are many jobs and processes in the industry that have not yet experienced the second industrial revolution – the one started by Henry Ford. In other words, the work has not been transferred to the industrial assembly line,” says YIT’s Marko Väyrynen, whose job title, Chief Enterprise Architect, is not the most typical in the industry.

However, the situation is now changing.

Väyrynen works in YIT’s Business Technology unit and in this role he encounters many places where new professions in the industry are emerging.

“The construction industry increasingly utilises prefabrication. If you have purchased a prefabricated house, you are already familiar with the concept. The foundations are still constructed on site, but otherwise even large buildings are nowadays often factory-made in the form of modules that are assembled on site. Each apartment arrives at the site in one or two modules, which contain everything necessary, including household appliances. At the construction site, the modules are lifted into place and connected e.g. to HVAC systems,” Väyrynen explains.

According to Väyrynen, the production of steel structures in construction industry is no different from the laws of automotive industry: robots can produce standard steel structures more efficiently than any human worker. However, workers, too, benefit from modular construction – on the factory floor, the temperature, humidity, amount of light and the work ergonomics are usually better than outdoors on site.

“I believe that, in Finland, prefabricated wood construction in particular will increase. This means that, in the future, there will be more jobs available for machinists and woodworkers in the construction industry,” Väyrynen predicts.

As construction increasingly relies on industrial prefabrication, the field has a growing demand for industrial professionals. One example is various BIM designers.

“You could compare them to people who model cars and car parts. The number and role of BIM experts, as well as the level of what is required of them, has significantly increased and continues to increase. In general, there is growing demand for capabilities that combine expertise in the construction industry with expertise in, say, digital tools, logistics and supply chains.”

According to Väyrynen, production lines will be set up not only in factories but also on construction sites. In practice, this means, among other things, the increased popularity of synchronised and standardised production methods. This, in turn, will create new competence requirements and a change in mindset with regard to traditional construction site roles. 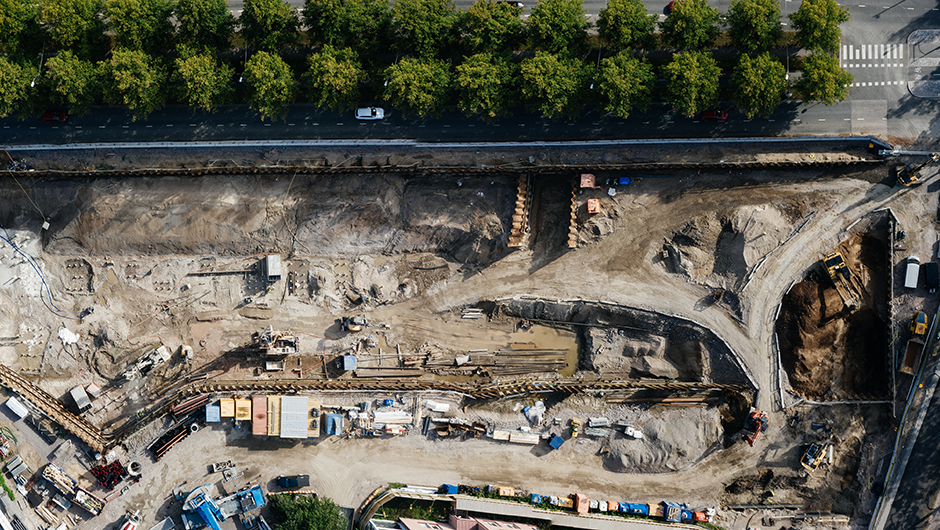 Alongside factory production, the professions and competence requirements in the construction industry are being shaped by a more recent industrial revolution: new cyber-physical solutions. The development of machine vision, cloud computing and robotics has brought new ways of obtaining a better situational picture on the construction site.

“For a robot operating on the ground, the construction site is a challenging operating environment because it is not standardised and does not have invariable dimensions. However, data needed for the situational picture can also be collected by means of a drone, for instance. Material inventories can be made at the same time. The resulting data can be combined with the building information model the BIM modellers have created,” Väyrynen says.

Martti Keskinen, who works in YIT’s Infrastructure segment, began developing drone imaging for construction site use in 2012. When YIT and Lemminkäinen merged, he started developing drone activities on a full-time basis. It is largely Keskinen who is behind YIT’s drone concept, which is now a fully blown construction subsystem. It provides a picture of the progress of the construction site, which can also be used for taking a closer look at a given detail, both by the project crew and at the customer’s end.

“On construction sites, drones are often used for photography and video, but on our sites the drone service does not stop there. We use it for surveying purposes as well; we create a snapshot of the project in the form of a 3D model, and process it to combine a huge number of photographs and precise location data. Our model has partially replaced traditional manual surveying,” Keskinen explains.

Drones have already been utilised in about 90 YIT infrastructure construction projects and also in other construction throughout YIT.

“Our biggest ongoing project is the Jokeri Light Rail. It is a 25-kilometre-long rail route that runs through the entire Helsinki metropolitan area. Our full-time drone operator is constantly surveying the area concerned. The project is divided into 40 drone shooting areas, which are surveyed with drone according to the progress of the project,” Keskinen says.

According to Marko Väyrynen, cyber-physical solutions will also give rise to additional services and supporting professions on the fringes of the construction industry.

“As early as the design stage of a project, we can, for example, take into account all the elements required for a smart building – the data produced by the entire built environment can be adapted for a common platform. Tesla has put computers and sensors in cars, and we can put them in buildings so that our partners can offer new types of services. That also requires a new kind of competence that combines construction engineering, information technology and digitalisation,” Väyrynen explains.

Väyrynen is strongly involved in building this new competence, as he is responsible for YIT’s Digital Talents trainee programme.

“Whether you take on a specialist in the construction industry or in the IT industry, basic training, as it is today, can’t directly meet the needs of new professions in the industry. For these jobs, we – and our partners – have to provide further training for the people involved.”

In the same breath he stresses, however, that there is still a shortage of traditional construction professionals in the industry.

“This will certainly be the case in the future as well. The industrial and digital development will not eliminate the need for skilled people. So, not everyone needs to be a tech guru, but the importance of roles combining different skills is growing. This contributes to the emergence of new professions in the industry – both now and in the future.”

How to get a job at YIT