Internal connections in Helsinki will improve in a sustainable way in the 2020s. One of the major urban development projects is Crown Bridges, which will connect the city centre of Helsinki with Laajasalo’s Kruunuvuorenranta and Yliskylä. The maritime route via Korkeasaari will be built for public transport, cyclists and pedestrians.

The Crown Bridges tramway project will be carried out as a combination of two contracting models. The two bridges between Kalasatama and Kruunuvuorenranta as well as the preconstruction in Korkeasaari will be realised as an overall contract, with tendering starting by the City of Helsinki in 2020. The rest of the construction of the connection will be carried out by an alliance that includes YIT. The construction is estimated to begin in 2021. The current target for opening the route for traffic is 2026, but the timetable will be revised in 2021 during the development phase of the alliance.

“Construction is likely to begin in the Hakaniemi area and somewhere in Laajasalo. In other words, at several points simultaneously. We are now making plans for the construction: where and how to build, what schedule and which resources and methods are to be used. In 2021, we can be more specific about the where and what, but the residents of the area will be informed about the plans earlier than that, if possible,” says Jere Keskinen, YIT’s project manager for the Crown Bridges alliance.

The work to be carried out by the Crown Bridges alliance includes the construction of the entire tramway and the 400-metre Merihaka Bridge between Hakaniemi and Nihti. In addition, the alliance has the task of renewing and building street infrastructure.

“It is absolutely great that we can contribute to the construction of sustainable transport. In addition, what makes the project special for me is its central location in the city and in Korkeasaari, which is a childhood landscape for me and my children,” explains Jere Keskinen.

Initially, the City of Helsinki started planning the project on the basis of the local master plan of 2002, in which the development of the tram line network played an important role. The city studied several alternative public transport connections to Kruunuvuorenranta, such as a cable car, and finally decided to organise a bridge competition. The residents have already given feedback.

“The feedback focuses on two things, nature values and the fact that the bridges will not be accessible to motorists,” says project manager for the City of Helsinki and chairman of the Crown Bridges alliance steering group Ville Alajoki.

According to Alajoki, the car is an inefficient mode of transport and, therefore, the decision fell on the tram, which can transport large numbers of people in a small space. It is also about urban development, which is supported by rail transport, because the rails are a permanent fixture. Therefore, the project can be seen as part of the construction of a future tram line network. 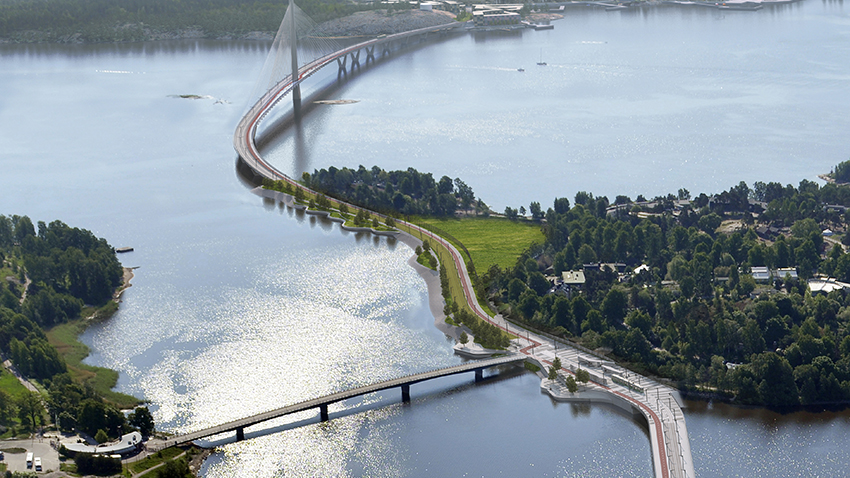 Soil decontamination in Hakaniemenranta improves the state of the environment

Large-scale land remediation will also be carried out on Hakaniemi shore due to preconstruction, and the bridge overhaul will require removal of contaminated sediment from the seabed. Their removal and processing shall be carried out in a controlled manner and in accordance with the provisions of the permit. Underwater excavation will be isolated from the rest of the water area by special structures and wet soil will be treated in accordance with specific conditions. From Hakaniemi it will be transported on well-sealed transport vehicles to the treatment site for proper decontamination.

“These are normal treatment processes for contaminated soil, in which we have solid expertise and which we carry out carefully and in accordance with the permit requirements. The seabed in the Hakaniemi Strait will be in a healthier condition once the project is completed,” says Jere Keskinen.

The city also has a lot of street infrastructure needs and it is sensible to renew the street infrastructure in connection with such a project. The tramway line requires changes to underground structures, such as cables and pipes, but future urban development can be taken into account during construction. The final decisions have not yet been taken and the project therefore has a large cost range of EUR 110–370 million.

“The decision to renew Hakaniemi Bridge was taken already in the last decade, which spurred the development of Hakaniemi. There would have been additional work anyway, but the construction of the tramway will schedule them for the next few years,” says project manager Ville Alajoki. 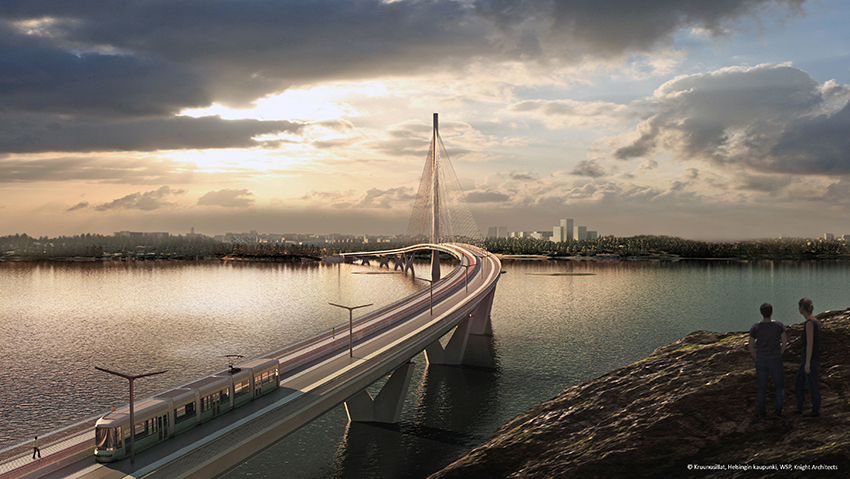 The alliance wins and loses together

The Crown Bridges alliance began its work at the end of November, which saw the start of the development phase that will last about 18 months. During the development phase, the alliance partners (City of Helsinki, YIT, NRC Group Finland Oy, Ramboll, Sweco and Sitowise) will jointly design the final content and implementation of the alliance as well as determine its target cost and incentive scheme.

“In this project, I am especially inspired by the alliance model, which encourages collaboration. In the model, the client, the constructor and the designer sit at the same table at the same time, seeking better solutions more efficiently. With unnecessary bureaucracy removed, common goals will improve cooperation. In the alliance model, the partners win or lose together,” says Jere Keskinen.

So, the alliance includes the client, who represents the residents and thinks about the life cycle, the constructor, who figures out how the project can be carried out efficiently and smoothly, and the designer, who puts everything together and does most of the work during the development phase.

After the development phase, the City of Helsinki and HKL will decide whether to start the construction phase. The decision is expected to be made in the spring 2021. In the spirit of the alliance, everything is constantly being discussed and choices are made on the basis of cost and quality targets. Consideration is given, for example, to the smooth and safe progress of the project, as well as disruptions during construction, and the planning process involves striking a balance between cost and other objectives.

“The alliance model is normally used for projects that are complex and involve many risks or potential changes. It works best in such projects,” says Jere Keskinen.

What matters most to the city in the alliance is transparency, which makes it possible to verify justified costs. Clarifying things to politicians also facilitates political decision-making and helps the project move forward.

“We use taxpayers’ money, so we need to be able to convince many people, including ourselves, that the spending is justified. Operationally, cost management is very important,” says Ville Alajoki, project manager representing the City of Helsinki. 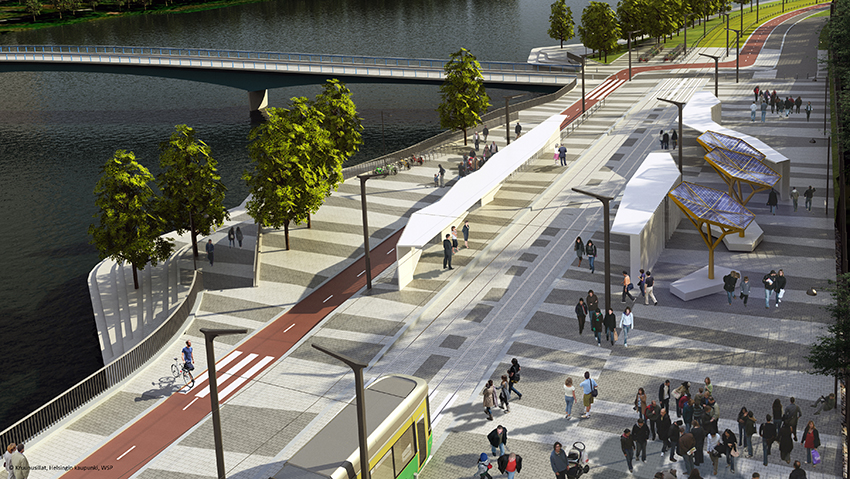 From Iso Paja to Hakaniemi

At this stage, the office of the alliance is located at Iso Paja in Pasila. The representatives come from seven organisations, and the collaboration has started well, although sometimes there has been some confusion as everything has to be built from scratch. In this sense, the alliance is a bit like a start-up company. Big strides forward may happen in one day.

“We have not sought perfection right away. Instead, we have started with smart solutions and developed them further. We have already prepared the bid together, so we know each other. In my experience, these projects tend to attract people who are willing to adopt new ways of working. The next change will take place in early March as we move to the final Big Room in Hakaniemi to work on the second part of the development phase,” says Jere Keskinen.

With the move to Hakaniemi, the alliance will also increase its personnel from the current 40 to about 100. During the second part, engineers will complete the technical design, which will be used as a basis for calculating the cost of the project.