The high-speed Jokeri Light Rail line between Itäkeskus in Helsinki and Keilaniemi in Espoo is progressing on schedule. The section between Viikki and Itäkeskus is the most significant construction site of the eastern section of Jokeri Light Rail and it requires a wide range of infrastructure construction competencies, from stabilisation work to the restoration of a brown trout stream.

YIT’s Area Manager Jussi Silvo, who has been involved in the project since October 2018, is in charge of production section number five of the eastern half of Jokeri Light Rail, which is the easternmost section of the entire project.

“The project is divided into six sections, with the easternmost production section spanning the area from Lahdenväylä bridge to Itäkeskus. The five-kilometre section is split between me and another Site Manager. The site I am in charge of is located right next to Itäkeskus,” Silvo explains.

While the overall project is large, Jussi sees it as consisting of a number of different streets. Varikkotie is the most demanding of these subsections, and it has influenced the preparation of the overall schedule.

“On Viilarintie, the work takes place on virgin terrain and involves tree felling and rock cutting. In the Roihupelto area, we have fairly ordinary road construction, like widening the streets between the existing plots of land. On Varikkotie, we do all kinds of things, and the critical nature of that work has been taken into consideration in the overall schedule.”

Tapio Karvonen from Ramboll is also involved in the project. He has worked closely together with Jussi, as the use of the alliance contracting model has meant that design and production operations have gone hand in hand throughout the project.

“During a career more than 30 years long, I have seen all kinds of projects, but Varikkotie truly is exceptional due to its special characteristics. There have been many unexpected turns, but we have been able to work together and solve many of the challenges we have come across,” Tapio says. 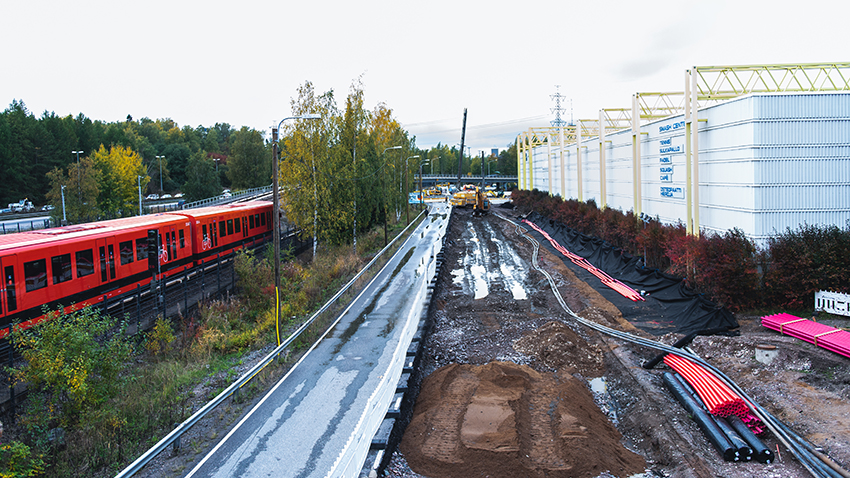 Located in the immediate vicinity of Itäkeskus, the Varikkotie site is about as multifaceted as an infrastructure construction gets. It combines a metro line, light rail, a road for cars and a pedestrian and bicycle route. To complicate things further, the underlying soil is watery clay, there is a 110 kilovolt power line overhead and the Mustapuro brook runs alongside the road.

“This is a demanding site. In Viikki, not far from here, the focus is on extensive rock cutting, here we work in soft clay under a metro bridge. This calls for careful, expert planning, as the conditions involve significant risks. If something goes wrong, the presence of the metro means that tens of thousands of commuters will be affected,” Karvonen points out.

Silvo echoes Karvonen’s comments about the significance of planning. Even small deviations can have noticeable impacts. This emphasises the importance of high professional competence when it comes to the working methods used.

“The metro line was built decades ago on wooden piles. The old foundations can behave unexpectedly when there is vibration and other effects from excavation and construction in the area. Recognising this, we use various methods to support the old foundations. To do this successfully, we need to know how to take the ideas from the planning table and put them into action.”

The expertise in the working methods used is particularly evident when it comes to the work phases. According to Silvo, the planning and execution of large and potentially hazardous work phases is guided by systematic risk management.

“The tight spaces of Varikkotie are the biggest cause of problems. Ordinary, we would work with large stabilisation and piling machines but, in this environment, we can’t reach the area next to the metro tracks or under the metro bridge with such machines. Smaller machines can’t reach deep enough, so the conditions of the site force us to find other solutions.”

The underground world beneath Varikkotie

There are two bridges over Varikkotie. A slab bridge built in the 1970s due to the low load-bearing capacity of the underlying soil connects a test track from the metro depot to the west, while the actual feeding track bridge connects Itäkeskus and the metro depot. The Jokeri Light Rail line will pass under both of these bridges in the near future.

“It’s not something the average person would notice when passing by, but there is a lot of outdated municipal engineering beneath Varikkotie, which was built 50 years ago. Before we can start with stabilisation and piling the foundation for the light rail line, we need to clear out all of the old structures to make way for the new. That alone is a big undertaking, even if the end result is something nobody will see directly,” says Silvo, explaining the many dimensions of infrastructure construction. 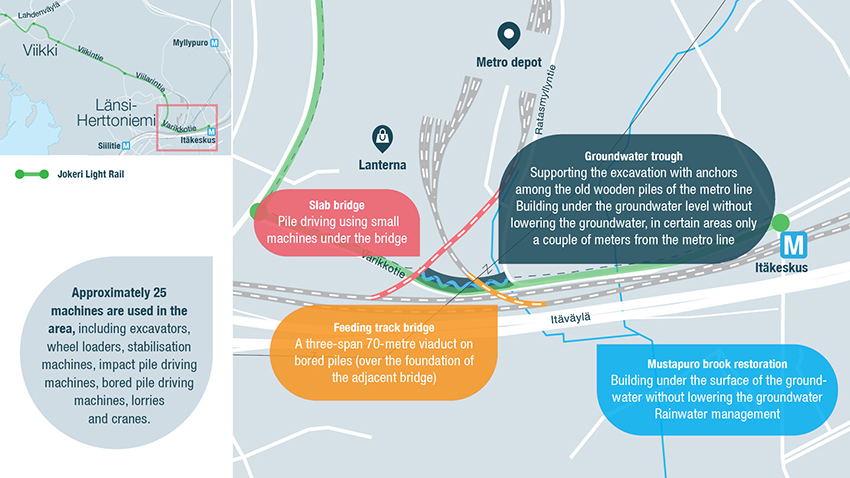 The most demanding part of the project on Varikkotie will be the groundwater trough that will be built from the slab bridge all the way to the Ratasmyllyntie intersection. Karvonen says this sums up the challenging nature of the project: the old methods used in the construction of the metro line mean that exceptional solutions are now needed.

“The slab bridge built due to the soft soil is very low. Nevertheless, we have to build the Jokeri Light Rail line underneath it. At the same time, the surface of the groundwater is only one metre underground. We can under no circumstances make that any lower. Otherwise, the wooden piles that support the metro line would dry up, decay and lose their load-bearing capacity. That is why we are building a groundwater trough.”

Silvo notes that the extra load created by the new light rail line cannot be placed on the foundations of the bridge. The consequences could be calamitous.

“In addition to having to build the groundwater trough, we need to consider the load-bearing capacity of the old bridge structures in construction. For example, we cannot have the Jokeri Light Rail line place an additional burden on the foundations of the old feeding track bridge, so we need to build an underground bridge over the concrete pile feet and the pile fields.”

The environment determines the time and place of construction

The large construction site also requires a lot of support activities from the environmental perspective. Mustapuro brook, which starts in Kontula and runs through the construction site, is a breeding ground for many species of fish, such as brown trout and pike. That means there are strict compulsory regulations concerning the turbidity of the water.

“Mustapuro brook is a protected and highly regulated construction area. The restrictions on the turbidity of the water went into effect on 15 September, so we had to plan our work in such a way as to finish everything by that date. Thanks to proactive planning, we have been able to maintain the natural conditions for the brown trout while ensuring that the project stays on schedule,” Karvonen explains. 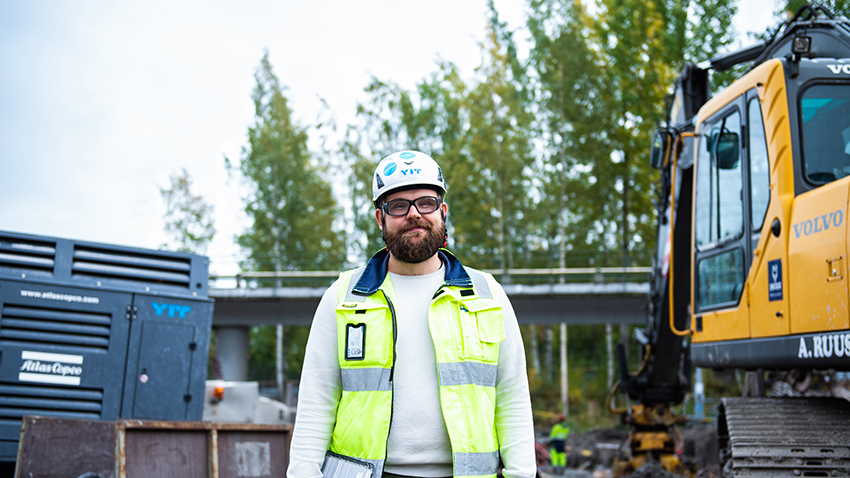 Silvo considers this a typical example of how nature and animal habitats can be respected during infrastructure construction.

“You could say that the start of the brown trout migration and the flood sensitivity were the most important factors in the Mustapuro restoration plan. In the absence of those factors, we may have executed our work slightly differently. As it was, the environment dictated the schedule on behalf of the site managers and planners.

In addition to the local nature, the project has an impact on the local residents. Closed until autumn 2022, Varikkotie may be seen only as a multi-year construction project to many people, but Silvo views things differently.

“When you are working on something of this magnitude, you have to keep in mind all of the positive outcomes of the project. While the majority of what we do will only become visible years from now, we can make it understandable to the local residents now. We openly communicate the various work phases, take the local residents into consideration and guide those who use these roads. We want our work to be in the best interest of the city’s residents.”