Seinäjoki railway station will return to its original location and the station area will become an integral part of the city centre. Sustainable choices based on the life-cycle concept underpin the visually interesting block structure designed by the architect.

What goes through an architect's mind when a large building project covering an entire city block comes across their desk?

"An architect's job is to present options, as there is no single right solution. Functionality, visuality, materials, sustainability, life cycle; all these factors must meet the objectives set out in the project plan," says architect Anssi Lassila, founder and director of OOPEAA Office for Peripheral Architecture.

OOPEAA has designed the Veturikortteli project, launched for the renovation of the Seinäjoki station area. The project has now reached its first construction phase. An entire new city block will be built around the railway station, including a family service centre, commercial, office and residential space and a parking garage. Lassila likes the diversity of the project.

"It will be an integral and coherent city block, not just a group of individual buildings. With a new start, life and structure, the station area will be an active centre and focal point of the city, in addition to being visually attractive."

A key element of the project is the station square, surrounded by a health centre, train station, public and commercial services and office space. An apartment building and parking spaces are in the immediate vicinity. Coordinating multiple buildings is an interesting visual challenge for the architect.

"The different shapes of the pitched and flat roofs of the buildings create an interesting asymmetry. A monotonic structure would not work on such a large scale."

The facades of the buildings are made of different coloured bricks, which Lassila sees as having a functional dimension as well as an aesthetic one. Giving directions will be easy: "Go to that red building" or "Go to the yellow building." Rusted steel adds its own touch to the parking garage.

Lassila describes the Veturikortteli block as a collage in which different building shapes and the associated diverse spaces are combined into a coherent urban entity. In his opinion, the block embodies Seinäjoki in a miniature and compact package.

Reducing carbon dioxide emissions and promoting sustainable development are important drivers for urban development. The guiding principle of sustainable construction is to consider the environmental and cost impacts over the entire life cycle of a building.

The life cycle assessment of construction includes raw materials, manufacture of products, transport, construction proper, use, maintenance, servicing, repairs, demolition, recycling of waste and so on. The key decisions are made as early as in the design phase.

"Sustainable architecture takes full account of how the life cycle of a building works. The carbon footprint over the entire life cycle is a key design driver."

The use of maintenance-free brick as a facade material and the water drainage and maintenance solutions for roof structures are examples of sustainable choices for the Veturikortteli block. In addition, LEED Gold certification will be sought for the Aallokko Centre and the station building, Asematalo.

The block will collect solar energy and make use of renewable energy sources. The seeds of sustainability were sown quite early in the project.

"The location of the station area and its accessibility are in themselves factors that support sustainability."

From an abandoned field into a core part of urban strategy

Erkki Välimäki, Director of Vitality in Seinäjoki, highlights the strong urbanisation of the city in recent years as one of the most important drivers for the project. A huge number of detached and terraced houses have been built in Seinäjoki in the past two decades. Since 2010, the number of apartment blocks built per capita even exceeds that of the Helsinki metropolitan area.

"Residents value the city centre as a place to live. The city should support this with public and private-sector services."

The redevelopment of the Central Square at the heart of the city has recently been completed. According to Välimäki, the next step is to redevelop the station area and integrate it into the city centre.

The station areas maintained by VR Group are often quite sparsely built; in Seinäjoki, the station area covers about 18 hectares of idle land. According to Välimäki, the city's role is to make use of available land in cooperation with other stakeholders.

"This idle land will now become a core area for urban development, fitting into the urban strategy as part of the city centre. We are lucky to have such an opportunity right at the heart of the city." 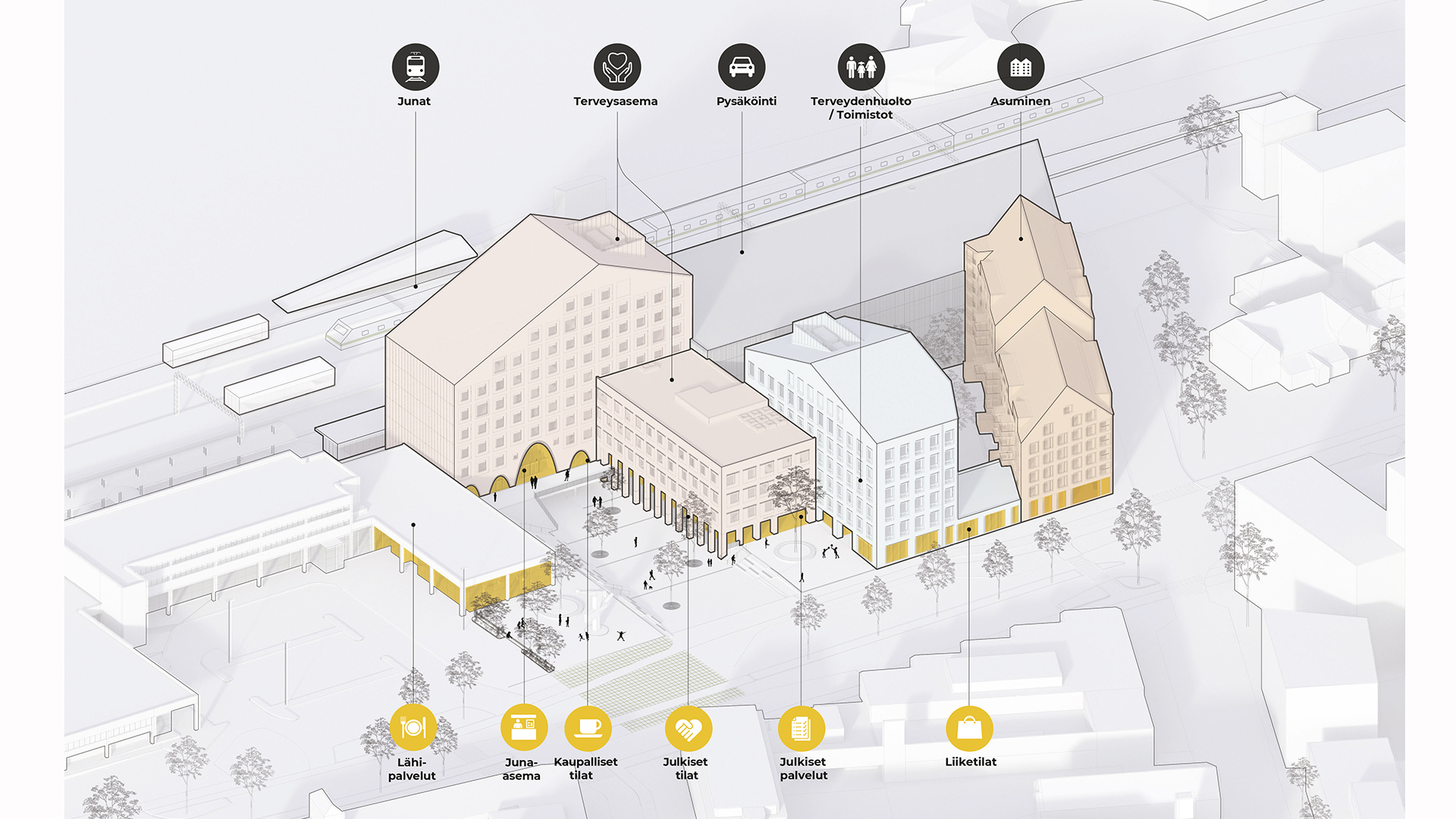 Result of a long-term project

In many Finnish cities, the railway station lies in the city centre. That was the case in Seinäjoki as well. But for some reason, in 1971, it was moved to the "wrong place," says planning director Martti Norja.

"Originally, the old station was located more to the south, with a direct view from the central square. The new project will restore the situation and put the station back in its right place."

Norja says that the station area project has been on the drawing board for more than 10 years. The Aalto University summer course held in 2014 provided a good basis for the preparation of the programme for an international architecture competition in 2015. The work of European architects under the age of 40 was transformed into a master plan for the station area in 2018.

"Mobility, housing, work and the provision of public and private-sector services fit well into the urban vision of the plan."

The architect's role is not only to design, but also to supervise the construction work, solve problems and make changes to the plans. OOPEAA has experience in large projects in Helsinki, Tikkurila and Jyväskylä, among others. Lassila, who has been in the industry for 20 years, sees this as a strength.

"We have the opportunity to see the big picture. We have to respond to a wide range of interests and objectives, and a large functional entity like this is always the result of a long process."

The Seinäjoki station area has kept an average of 5–10 people busy at Lassila's office. An architect is expected to come up with creative and imaginative proposals. Where do they come from?

"When you travel, you see the world and solutions from different eras. At home, you can then use those solutions, adapting them to the local life and environment. The things one sees and experiences personally are important drivers in this work."

OOPEAA has been involved in the project since the planning stage. Lassila is very pleased with the cooperation with the City of Seinäjoki and the project developer YIT.

"We have maintained a close dialogue and worked closely together in a spirit of consensus."

Located in South Ostrobothnia, Seinäjoki received city status in 1960. At that time, living in apartment buildings and in the city centre was not the norm for residents in the area. In this millennium, things have changed and the city has undergone strong growth. Seinäjoki has now more than 65,000 inhabitants and continues to grow. Which is no wonder, as Seinäjoki has been chosen 13 times as the most attractive place for business in Finland in barometers and rankings by the Confederation of Finnish Industries, Suomen Yrittäjät and Taloustutkimus.

Seinäjoki is located on the Helsinki-Oulu main line, part of the trans-European TEN-T transport network. Seinäjoki is also part of Suomen Kasvukäytävä (Growth Corridor Finland), a network of regional development cooperation stretching from Helsinki to Seinäjoki. The country's largest single employment and economic area serves as a platform for smart mobility solutions for people, goods, services and knowledge.

The Seinäjoki station area project is about housing, mobility and activities in the city centre. A future pedestrian and cycling underpass with parking areas will connect parts of the city in an east-west direction. The Aallokko service centre, which is to be built in the station area, is an example of bold organisation of social and health services. 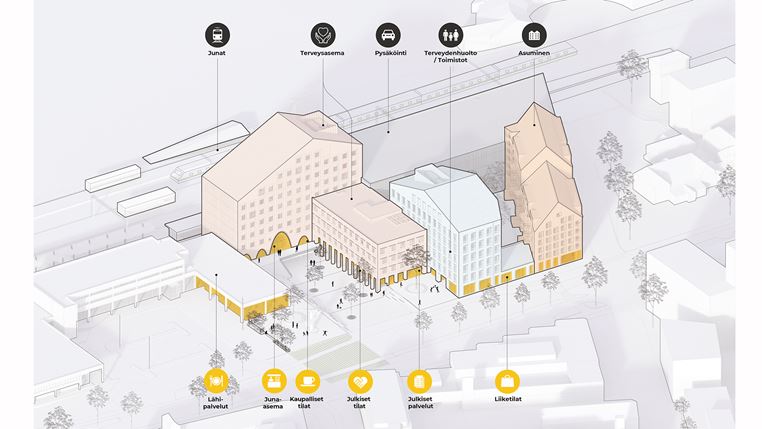