Common, simple ground rules can prevent most of all issues that rainy winters pose to the construction industry

Today, operators start thinking about indoor air control right from the beginning of the project. This work has become much more systematic.

In addition to all the other severe consequences, climate change causes considerable issues in the construction industry where the control of humidity and other conditions have traditionally been based on a climate featuring dry, cold winters. Interim Executive Vice President at YIT´s Housing Finland and CEE -segment Marko Oinas and Development Manager Arto Ylikangas are aware of the challenge and its extent.

“The increased rainfall is one of the many problems we are facing, but other weather phenomena, such as slanting rain, have also become more common,” says Oinas.

Slanting rain refers to rain falling at an angle due to heavy winds. Instead of hitting the waterproof roof of the building like normal rain, slanting rain falls onto facades and their structures. This allows the water to penetrate the structures through even the tiniest cracks.

“This creates optimal conditions for mould. In Helsinki, for example, areas such as Jätkäsaari, Kalasatama and other coastal neighbourhoods will increasingly face such weather strain.”

This elevates not only the risk of mould and condensation but also the risk of frost weathering in old concrete facades. The impact of slanting rain must now be taken better into consideration in lead-throughs, fastenings, seams and the capping of window openings, for example. 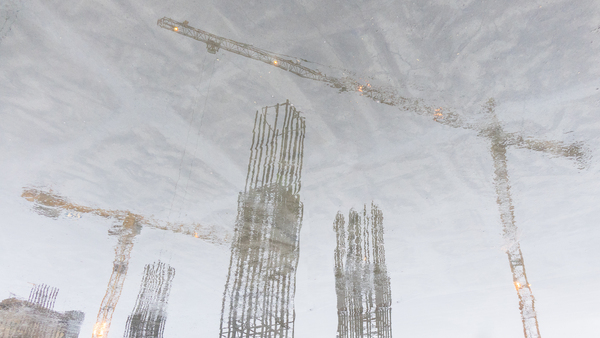 Taking weather conditions into account in the planning stage and erecting the building appropriately primarily means that the building is weather-protected. However, this point is not reached until months or years into the construction project. Controlling the conditions in an unfinished, open building is much more challenging, especially now that mild, rainy winters are becoming more common.

“Snow is easy to remove, but water runs right through structures. Structures, especially concrete, also hold large amounts of moisture that must be drained. Operators in the construction industry are now starting to understand the full scope of how much time and energy this all takes,” says Oinas.

Sensors monitoring humidity, evaporation rate and the temperature of the space in real time have proven particularly useful.

As Finland is starting to experience a more “British” climate, construction operators have started opting for weather covers, another important new innovation.

“The use of weather covers has surged; they were quite rare only ten years ago. On the other hand, the entire frame is not usually covered unless the building is being thoroughly renovated or after the completion of the frame of a new building, if necessary. In new construction, weather covers are not ideal as the building keeps rising,” says Ylikangas.

However, Ylikangas agrees with Oinas that paying attention to controlling the indoor air is the most important change.

“Today, operators start thinking about indoor air control right from the beginning of the project. This work has become much more systematic.”

How is the humidity and conditions control handled in Business premises? How about in As Oy Tampere´s Vedenvälke?
Read the whole article in our Newsroom.

FACT:
Global warming is advancing faster than ever before, resulting in various alarming phenomena around the world. In the North, the rapidly melting polar glaciers have become the symbol of global warming. The climate emergency is also impacting the everyday lives of Finns on a smaller, though still significant, scale: the past few winters have been exceptionally warm, especially in southern Finland. According to Statistics Finland, the southern and western parts of Finland did not experience a proper winter in 2019–2020. In the South, thermal winter did not take place until the end of February, only lasting for five days.