We were responsible for renewal of the airside area at Tallinn Airport.

Tallinn Airport is preparing for future increases in air traffic. We were responsible for renewal of the airport's airside area.

With the project, Tallinn Airport Ltd. wanted to be prepared for future increases in air traffic and improve the safety of the airport. The most demanding work involved the renewal of the entire paved surface of the runway.

The quality standards were high. YIT was the company that renewed the Tallinn Airport runway during 1994–1995, which has lasted in fine condition for two decades.

As a whole, the contract covered both the planning and the execution of the project, including earthworks and paving, along with the reconstruction of storm water systems, as well as the renewal of airport technology, such as airfield ground lighting and navigation systems.

We expanded paved areas of the airport's airside area and reinforced the foundation of the existing strip area. We also built service roads, areas for snow disposal and de-icing treatment, testing sites for aircraft engines, fire exercise and manoeuvring area for airfield maintenance equipment, as well as concrete paving and apron stands in the airside area.

Airports are always challenging locations due to the strict safety regulations. In addition, one needs to make sure that air traffic continues to flow smoothly through it all. Night-time construction was also needed: there's a window of about six hours when the airport is closed for some nights of the week for air traffic.

The project also featured cutting-edge technology that is quite rare in the entire industry. Case in point: the new airport ground lighting system deploys only LED technology. The installation of a new LED system will dramatically reduce the customer's electricity bill.

"According to the information we have, this is the first airport in Europe to have 100 per cent LED ground lighting system," says Hando Rannamägi, electricity expert at YIT.

Project name
Renewal of the airside area of Tallinn Airport 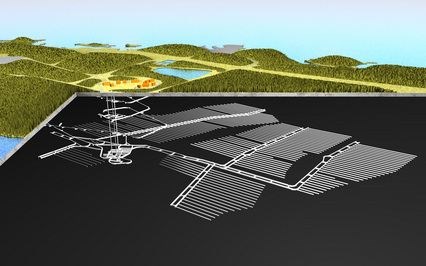