What should a region, where one of Europe's most significant growth and technology hubs is developing, look like? The question is being actively considered by Helsinki's decision-makers, YIT and KEVA, together with the AOR Architects.

The start-up scene of the capital has traditionally been scattered around Helsinki and Espoo. Maria 01, the start-up house which has been operating since 2016, has gathered a large part of early-stage start-ups into its premises. As the start-up field is developing and growing, the needs of entrepreneurs have changed.

According to a recent study, the start-up field in the Helsinki metropolitan area is thriving — the value of companies has tripled within six years, and investment in start-ups has grown by an average of 32 percent a year.

How to develop the area so that it will continue to serve entrepreneurs, respect the traditional architecture of the area and create more value for the residents of the region?

“It is challenging, predicting the future is even more difficult today,” says Arto Ollila, partner at AOR Architects. AOR, founded in 2015, is one of the most successful young Finnish architectural firms of the moment. The office’s works include Jätkäsaari school, as well as the extension to Tampere Art Museum and the Tuusula high school, built with logs, both of which are currently under construction.

AOR is now also responsible for the visual design of the future Maria Campus together with JKMM Architects.

At the latest, the pandemic made the designers abandon their original plans. People’s ways of working have changed radically, but developers in the area are confident that time spent together will be even more valuable in the future. Therefore the facilities need to be able to provide as much added value as possible.

Flexible spaces are the starting point for sustainable construction

An area of ​​more than 50,000 square meters is planned for the new southern part of the current Maria 01 area, with the aim of transforming the former hospital area into a center for start-ups, as well as scale-ups and other technology companies. The development of the region will create about 3,000 new jobs. Most of the new area will provide flexible office and work space, in addition to which accommodation, restaurants, business and service facilities, wellness and exercise facilities and event space are being planned.

The area has a rich history. Maria Hospital is one of the oldest hospitals in Finland and the country’s first epidemiological clinic. Throughout the years, several buildings designed by different architects have been attached to the hospital area. However, the block has not been developed systematically and therefore it has ended up giving an incoherent impression.

“As an environment, Maria Hospital is a bit exciting. The adjacent Ruoholahti represents the construction of the 80s and 90s, with a lot of glass and high buildings. In contrast, the current start-up house Maria 01 is old and made out of stone. Next to the house, there is also a cemetery and low wooden houses of Ruoholahti villas,” says Ollilla.

According to Ollila, the city must develop, but with respect for the old and drawing on its spirit. "The recreation areas next to Hietalahti are a great example of how the area can be rehabilitated while preserving some of the old."

What Ollila considers most important is that the developers consider the population living in the area, their needs, and also understand that things can change very quickly. “The facilities must be such that they can be repurposed and supplemented without having to be dismantled and rebuilt. This is the starting point for sustainable construction.”

The developers of the area want the Maria Campus to be open to all residents and visitors of the area, and so some parts of the building will be dedicated to public workspace. Ollila mentions that often the upper floors of buildings are reserved for large companies, but now they want to make sure a part of the higher floor will work as a common space for everyone.

In the workspaces of the future, people will brainstorm together and focus on deep work

Many believe that the experts of the future will adopt the so-called hybrid model — working partly in the office, partly at home.

In the AOR office, future work patterns find their way to discussions on a weekly basis. One thing Ollila is sure of is: there is no going back. "The pandemic has shown that the old models are not working, and that has facilitated and enabled new thinking." In the future, the transformability of the interior spaces will lay at the core of the design. The same facilities need to be able to serve collaboration and sharing ideas while at the same time provide an opportunity for work that requires deep concentration of individual employees.

"The need for office space may decrease, but high-quality workspace will be wanted in a replacement, to make coming to work feel significant and rewarding."

More than 50 people, in charge of different aspects, are involved in the design of the new Maria Campus. The house, electricity, traffic planning, architecture and the business part, Ollila lists. The new area is being planned in cooperation with the current residents of Maria 01. When residents were asked about their wishes for the new Marian Campus, some of the responses caught the architects by surprise.

“Surprisingly many of the users wanted art in their workspaces,” Ollila says. In addition, users hoped to get cycling cafes, marked walking trails around the house, as well as facilities for relaxation and a room for napping. One of the popular suggestions was an international kindergarten.

Many residents of Ruoholahti and Hietalahti find the area underdeveloped and hope to see new services flourish in the area. Maria Campus will meet this need.

The focal point of the development of the area is that the future campus, which will be home to thousands of entrepreneurs, investors and other actors, will create encounters that will create world-changing solutions through collaboration and rapid experimentation.

Ecological, social and aesthetic sustainability has been emphasized in many of the sites designed by the AOR. The same will be pursued in the design of the Maria Campus.

Ecology should be the starting point for all construction, reminds Ollila. The goal of Helsinki is to be a carbon-neutral city by 2035, and therefore the measures listed in the Carbon-neutral Helsinki 2035 Action plan are examined and taken into account in the planning of the Maria Campus.

“Maria Campus is an experimental house and on a large scale its design is guided by carbon neutrality.” 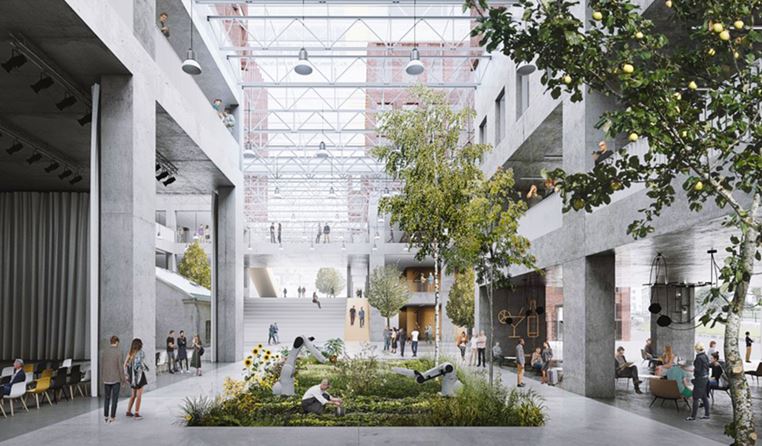