When Paloma Bautista was working in Spain, she spotted a problem in urban development. The company serving the Ministry of Development she was working with was developing a railway project across Bautista's hometown. Whereas the studies and numbers supported the need for such development, direct dialogue with the citizens on the matter only happened once the plan was already made, which encouraged citizens to complain about it, rather than suggest improvements. That’s a problem Bautista and her team are now addressing at CHAOS, the smart city platform that combines urban data with human perspective and creativity. 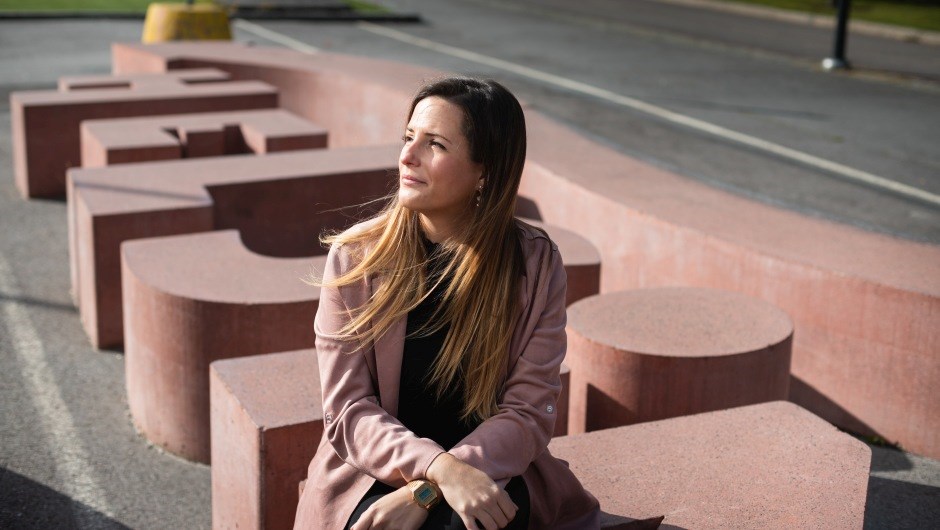 From Canary Islands to Tampere

"Finnish people are usually amazed to hear that there are people (other than Finns) living in the Canaries", Paloma Bautista laughs.

The groups of seven islands are one of the most popular travel destinations for Finns wanting to escape the winter darkness.

After studying Architecture in the sunny Gran Canaria, Bautista moved to Tampere in 2014 after having met her partner in Turkey – the first Finn she ever met. She pursued her passion for moulding urban spaces to enhance people’s experiences, but quickly understood that finding a job as a non-Finn was tricky.

"Finland is very foreign-oriented but knowing the language allows you to better understand its culture, its people, and the way things work around here.”

In addition to learning the language, Bautista managed to boost her professional network in Finland through volunteering work in her field, and found that the work opened her doors.

"When you prove your worth to a Finn, they become your best advocates. They stick to your side and support you.”

During one of the networking events, Bautista met a passionate fellow architect who shared her passion for people-centred urban development. Natalia Rincon was pitching the idea of what is nowadays CHAOS smart city AI platform.

Both women shared the passion for matching urban development with people by utilizing technology. In their opinion, technology enables fact-based decision-making and transparency, which is often missed in the process of urban development, which remains still to this day quite an old-fashioned industry.

"There are still a lot of individual assumptions (and lobbying) when conducting urban development plans. People are involved in the process, but often this happens too late and concerning decisions that do not have a real impact”, says Bautista.

The key to understanding city complexity is understanding its people. There is a lot of quantitative data available that reveals the way people live and move in cities. CHAOS combines this with qualitative data coming from people’s ideas and needs, to form its core. This kind of soft data is taken into consideration to affect decision-making in urban planning.

So, why not ask directly from people they need in their cities? Why not relate this input to all the urban data, to affect the cities´ decision-making process?

According to Bautista, one of the challenges in urban development lies in recognising citizen engagement as a tool for transparency and dialogue, and not as a magic wand. Many of the development players wanting to genuinely involve people – the forgotten stakeholder –  as participants in their processes, fear not being able to address everyone’s concerns to meet their individual needs.

Regarding urban data, the overwhelming amount of information requires someone to point out what information is relevant and how to structure and correlate it. This is where CHAOS comes in. The platform offers AI-powered urban insights and forecasts in which ways cities should be developed to become more sustainable and meet the needs of its citizens. 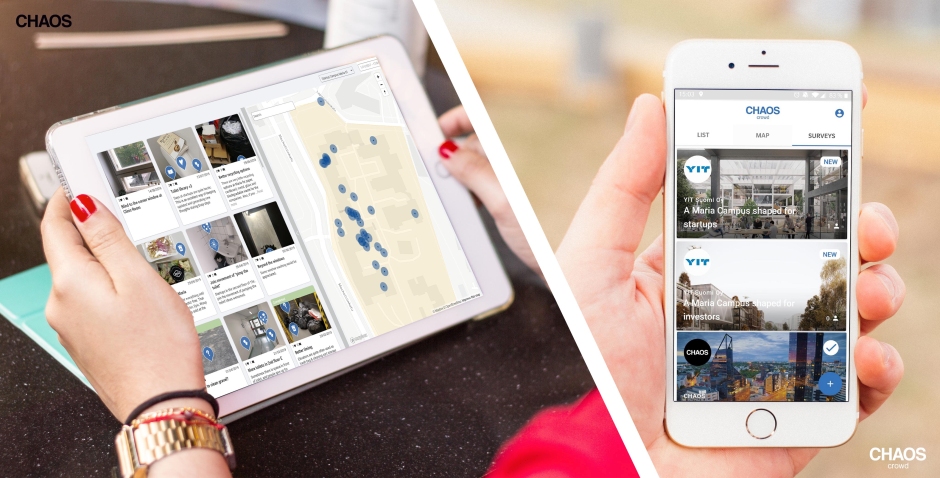 Maturing from a startup to a social-impact champion

The company moved to Maria 01 three years ago and is now developing Maria Campus Area in co-operation with YIT.

"When Natalia and I first came to Maria to check out the potential office spaces, we were handed a couple of helmets. We were very excited as we knew already then that it would be here where all the magic would happen."

And so, it has been. Hosting over one thousand tech-heads, Maria 01 grows to be Europe’s largest startup campus, as it witnesses the blooming of the early-stage companies it shelters. In less than a year, CHAOS grew from a Tampere-based four-person unit with a bold vision to a 12-people strong executing team operating from Helsinki. 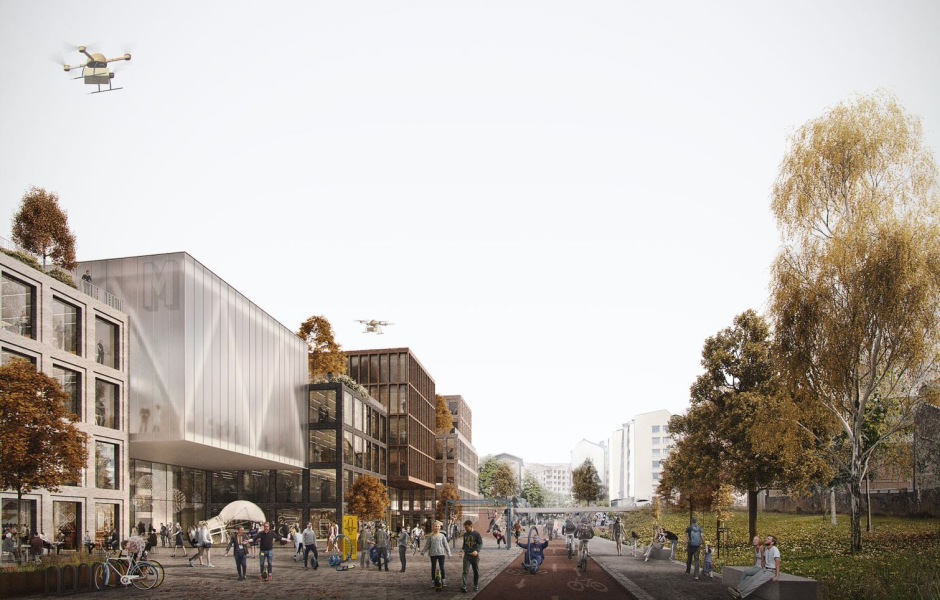 On their first day as Maria members, as Maria’s first-anniversary party took place, CHAOS was already speaking business with who would shortly after become angel investors of their first ever round.

A year later, the company was awarded as the global social-impact champion in the category of government and citizen engagement by the World Summit Awards (WSA), an international competition founded in the framework of the UN.

Bautista reveals that the company gets numerous speaker invitations for events on the field of data-driven cities, AI and tech in urban development, or digital citizen engagement, amongst others.

She wishes that the public sector would integrate startups more in their doings, as they are the perfect test-bed scenarios. Cities would get to explore state-of-the-art innovations to enhance their processes, in an agile and fast way. Startups would validate and perfect their solutions. If it doesn’t work, the failing is quick and cheap. If it does, the impact and technological advance are huge.

Finnish companies could be forerunners – big companies’ mindset is changing

Now, CHAOS has already customers like SKANSKA, NCC and KONE. One of the most significant projects is the development of Maria 01 into a campus innovation in Helsinki, in consortium with other stakeholders, led by YIT. CHAOS is taking care of the community engagement. Through the CHAOS Crowd app, partners, current and future members of the Maria 01 community, and residents of the area can share their ideas of how to develop the Maria 01 area. Together with their creativity, understanding the demographic needs of the participants will help city developers to plan the space accordingly.

"This is much more efficient than organizing neighbour gatherings or citizen workshops where inhabitants need to be in one place at a specific time and where usually not all the opinions are voiced out."

In the first phase, CHAOS has been gathering insight from Maria 01-based founders and employees.

"The most interesting part is to discover an area’s character based on the lifestyle and needs of its peoples’ demographics. In Maria 01, for instance, ideas revolve around childcare units, networking activities (such as dog walking!) and bike facilities."

Bautista thinks that, unfortunately, still today many of the talks about smart cities are plain PR. In Finland, however, many initiatives seem to be the real deal.

Companies like YIT are taking the lead into re-formulating the traditional urban development chain by including citizen participation in its early stages, and through digital means.

"I see Finland as the world of opportunities in terms of utilizing data," says Bautista. “The key ingredient, rather than the data itself, is to have the right mindset to understand the power data-based insight can bring.”

In the next phase, CHAOS Crowd will be open for all citizens of the Kamppi area to contribute with their thoughts and suggestion on how the area could be developed.

CHAOS Crowd app is open for the public to express their opinions until 14. February 2020. 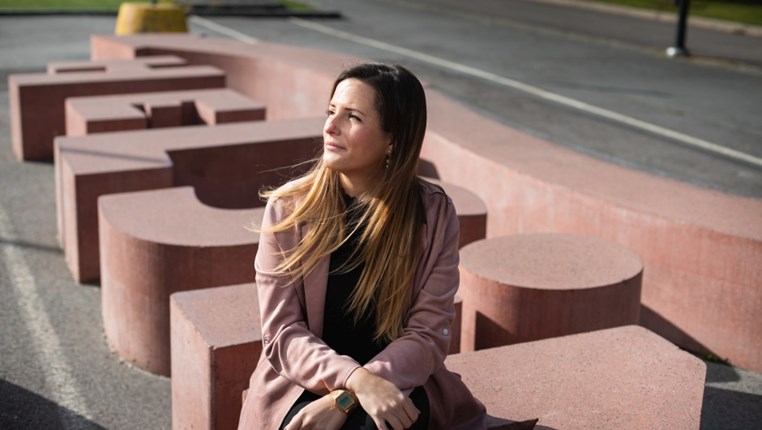 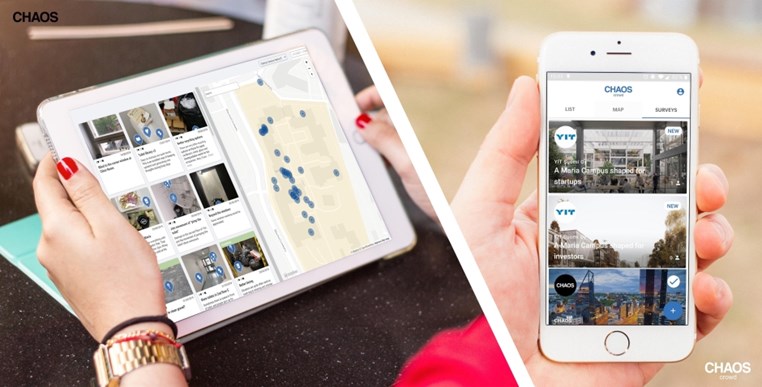 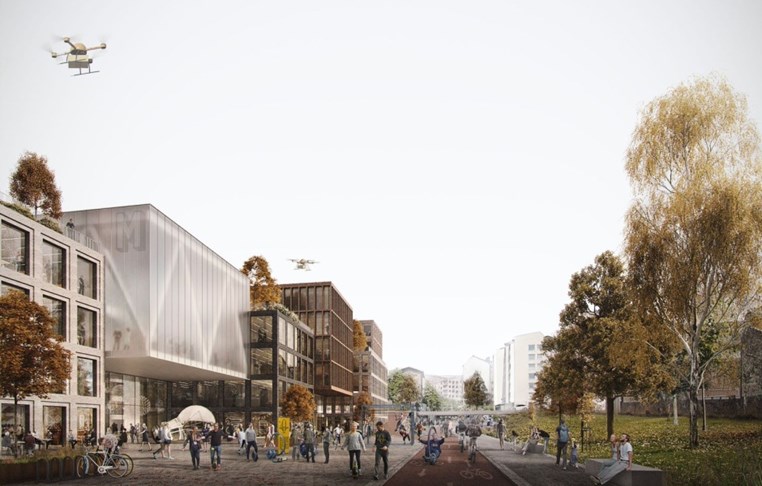