10 questions and answers regarding the Vantaa seasonal heat storage

1. What is the Vantaa seasonal heat storage?

The Vantaa seasonal heat storage is a subterranean thermal energy repository of about one million cubic metres, where renewable heat energy from solar, wind and waste heat sources, among others, is stored in water at 140–150 degrees Celsius. The seasonal heat storage has a total capacity of 90 gigawatt hours, which corresponds to the annual heating demand of a medium-sized Finnish city. The stored energy will replace the use of natural gas in the winter season in 2026, enabling fossil-free energy production and reducing Vantaa Energy's carbon dioxide emissions will by 65,000 tonnes per year. The seasonal heat storage will play a key role when Vantaa Energy phases out fossil fuels by 2026 and progresses towards carbon negativity by 2030.

2. Why is the Vantaa seasonal heat storage needed?

With the seasonal heat storage, Vantaa Energy can phase out fossil fuels, as the energy produced with renewable energy sources during the summer can be stored and used during winter frosts. The stored energy replaces the use of natural gas in the winter season. Phasing out fossil fuels will reduce the carbon dioxide emissions from heat production by up to 65,000 tonnes per year, when the use of fossil fuels in heating will be replaced by stored renewable energy.
The importance of storing waste heat is also highlighted by the seasonal heat storage, as it enables energy that is left over in one place to be used elsewhere. The utilisation of waste heat improves resource efficiency.

The seasonal heat storage will reduce the dependence of Vantaa – and all of Finland – on imported fuels.

3. What does it mean that the Vantaa seasonal heat storage will be built using the alliance model?

The alliance partners are working together to find solutions for implementing the best possible seasonal heat storage from the point of view of nearby residents, stakeholders and climate goals.

4. Where will the Vantaa seasonal heat storage and the service tunnel entrance leading to it be located?

The seasonal heat storage will be excavated underground in Kuusikonmäki, Vantaa, so that the actual water tanks will be located under Ring Road III. The entrance to the service tunnel will be located in the ramp area of Ring Road III, next to the Vanha Porvoontie road. In the original plans, the location of the entrance to the service tunnel was in the Untipakka area, but then a new location was decided on so that it would be as far away from apartment buildings as possible.

With the entrance to the service tunnel located in the immediate vicinity of Ring Road III, it is possible to direct heavy traffic during construction almost directly to Ring Road III and avoid directing this traffic to smaller local roads or streets in the area.

When looking for a location for the seasonal heat storage, site inspection has been done with care. The criteria for the location of the seasonal heat storage include, among other things, that it must be located close enough to the district heating network so that it is possible to transfer heat through the heat network in the first place. In addition, the location should be close to the production unit to avoid the need to transport hot water over long distances as this would cause cooling. Important criteria also include the suitability of rock quality and how the site is located in the city and how it affects the environment and people.

5. Where are the heat transfer lines situated for transporting heat from the Vantaa seasonal heat storage?

The heat transfer lines for transporting heat from the seasonal heat storage have been planned long and carefully. Several route alternatives have been considered, and in practice, the technical feasibility requires the pipeline to go through Kuusikonmäki, as it makes the most sense technically that the pipeline routes run through there.

The construction of heat transfer lines is part of everyday infrastructure construction work and similar construction of the district heating network is carried out every year to a significant extent in Vantaa. The pipes of the heat transfer lines will be located underground at a depth of approximately 1.5–2 metres. The structure of the pipe itself is the same as in normal district heating. The only difference is that the urethane insulation has a different composition so that it maintains its insulation capacity at a higher temperature.

Possible traffic disruptions due to the pipeline construction work are temporary. The estimated construction time is 3-5 months. Similar pipeline work is constantly carried out in the centre of Helsinki, for example, and the work can be well coordinated with traffic. 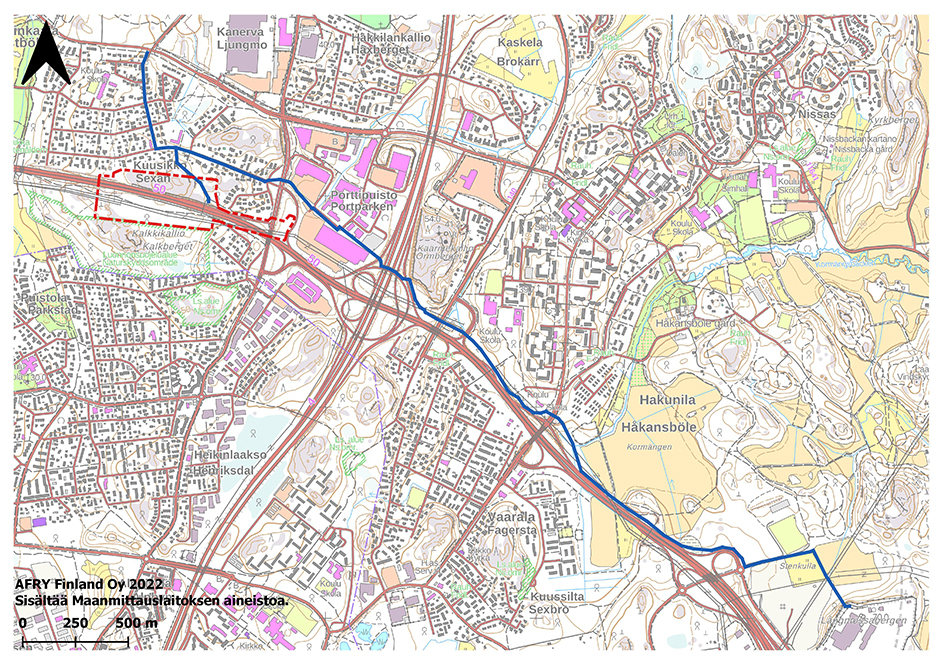 Plan for the heat transfer lines.

6. How are excavations carried out during the construction phase of the Vantaa seasonal heat storage?

Blasting work made as part of the excavation of the seasonal heat storage shall be in compliance with all detailed instructions, regulations and threshold values specified by the authorities.

The excavation work in the seasonal heat storage project will last approximately 2.5–3 years. The vibration will be at its highest level when the excavation work is done closest to properties, and the impact of the vibration depends on the location of the excavations. The vibration levels will be continuously monitored through remote-readable vibrographs, which will be positioned and shifted as excavations progress. During the excavation phase of the tunnel entrance, the blasts will be heard very clearly, and the sound will become attenuated when the tunnel progresses under Kuusikonmäki. In the initial phase, a sensation of vibration may be caused by the atmospheric pressure caused by the blast. The first part of the tunnel is close to the ground surface and the direct distance from the excavation site to the houses of Kuusikonmäki is shorter. This will cause slightly more disturbances for a limited period of time. As the excavation proceeds deeper under Ring Road III, it will no longer affect properties as much.

Both the relocation of the service tunnel entrance to the ramp area of Ring Road III and the placement of water tanks as far away from the apartment buildings as possible have been included in the planning with the residents' comfort of living in mind and with the aim of minimising vibrations and noise as well as possible.

Many underground spaces similar to the seasonal heat storage have been excavated close to apartment buildings for example in Helsinki and Espoo.

The attitude to vibration is an individual experience. Humans are able to detect even small vibrations, and in many cases the variation in atmospheric pressure can already feel like vibrations. Domestic animals react to vibrations in varying ways. Animals in nature have not been found to be affected by vibrations in similar previous projects. However, there are recommendations regarding vibration levels, and these are adhered to in the seasonal heat storage project. It is known that some people may find vibration disturbing, even if it does not exceed the recommended levels, as the experience of vibration is very individual.

Construction work that creates disturbance for the environment for example in the form of noise or vibration, must be reported to the City of Vantaa's Environmental Centre. The Environmental Centre will then set the daily working hours for the construction work. Blasting work is proposed to be carried out at the entrance of the tunnel (quarrying) from Monday to Friday from 7.00 a.m. to 9.00 p.m. and in the tunnel on weekdays from Monday to Friday from 7.00 a.m. to 10.00 p.m. We prepare for possible repair blasting work on Saturdays (not public holidays) from 8.00 a.m. to 6.00 p.m.

7. What are the disturbances during the building of the Vantaa seasonal heat storage?

Blasting work, dust, noise, heavy traffic at the construction site, and other factors that can cause disturbance have been assessed quite comprehensively in the EIA report for the entire project area. For example, noise and dust will be less visible to the residents of the area now that the entrance to the service tunnel is in the ramp area of Ring Road III instead of Untipakka and the construction work will not be carried out in the immediate vicinity of the apartment buildings.

Some noise, vibration and dust will be generated during the construction, but we strive to avoid factors that cause disturbance by, for example, reducing the amount of dust entering the public road network by irrigating the blast rock, asphalting the ramp to the service tunnel, brushing the asphalt and washing the tires of construction site vehicles when necessary. Less heavy traffic will now be routed through the residential area as trucks leave the construction site directly to Ring Road III.

8. How will traffic and road safety be taken into account during the construction of the Vantaa seasonal heat storage?

In the area of the Vanha Porvoontie road and the ramp to the west of Ring Road III, a junction with traffic lights and a pedestrian crossing have been planned with the Finnish Transport Infrastructure Agency and the ELY Centre to improve safety in the area where heavy equipment will be moving.

After its implementation, the seasonal heat storage will not cause continuous heavy traffic. The facility will subject to normal maintenance and operation checks, which will cause daily and, as a rule, passenger car traffic to the facility.

After its implementation, the seasonal heat storage will not cause continuous heavy traffic.

9. How are wells and groundwater taken into account in the construction area?

Groundwater flows in the area will be determined by measuring groundwater levels from groundwater observation pipes installed in the area. The same procedure will also show the directions of the groundwater flows. The groundwater level may temporarily decrease in some parts of the construction area, which is estimated to have an impact area of about 300-400 metres from the construction site. With the help of monitoring points, deviations in the groundwater level will be quickly detected and corrective measures can be taken quickly to restore the situation. If a drop occurs, it will not occur symmetrically over the entire impact area within a radius of 300-400 meters, but only at some parts of the area within that radius. It is also to be noted that this is not a permanent phenomenon, rather it will only occur during the construction period.

10. What kind of water is used in the Vantaa seasonal heat storage?

According to the current plan, the seasonal heat storage will be using HSY's tap water, i.e. the water from Lake Päijänne. Thus, there will be no need for the sedimentation tank that was set out in the original plans.